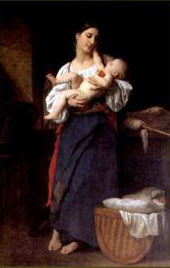 O.K., back to birth related mythology.  What can I say, it's on my mind right now.  We've already done Greek, Norse, Egyptian, virgin births, and even German legend, so what next?  How about Roman?

Carmenta is the Roman goddess of childbirth.  She also dabbles in prophecy. She is one of the Camenae, goddesses of springs, wells, and fountains.  Pretty much water nymphs belonging to Venus.  There are three other Camenae - Egeria (who's claim to fame was that she slept around with a king and gave him advice), Porrima (when a baby is born head first, she is present), and Postverta (she's present at feet first births).  Our Carmenta is the leader among them.

There is a grove outside the Porta Capena that is sacred to Carmenta.  You might want to go there January 11 and 15 for her festival, but don't bother going if you are male, it is pretty much a female event.  Whatever you do, though, don't wear leather or other dead animal skins to their sacred places.  They don't like it.
Posted by Mark Alford at 4:17 PM

Email ThisBlogThis!Share to TwitterShare to FacebookShare to Pinterest
Labels: Roman