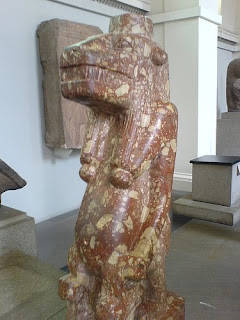 Before I get any more mean looks from my female readers out there, I'm not making the comparison between hippopotami and pregnant women.  I know that pregnant women feel self conscious but I think in reality the only person who looks at a pregnant woman and thinks fat is the pregnant woman herself.  To everyone else she just looks beautiful.
Now with my disclaimer out of the way, let's see if I can stick my foot into my mouth.  Taweret is the Egyptian goddess of pregnancy and childbirth.  Her name means, "the great female one."
What does she look like?  She is usually shown with the head of a crocodile (although sometimes with the head of a hippo), the body of a hippo with large breasts and bountiful belly, and the feet of a lion.  The crocodile and lion parts are to show her fierceness in protecting pregnant mothers and children.

Why a hippopotamus?  Well it was not because of the insensitivity of the Egyptians.  You need to remember that the Egyptians would have to deal with hippos on a regular basis.  They soon learned that male hippopotami are aggressive (in fact, the hippo bite is considered the deadliest, not because of the number of people killed by the hippos, but rather because when they do bite, it is nearly always fatal).  due to their territorial nature.  Female hippopotami are nicer.  They are usually very calm and do not seem to care about territory.  They are aggressive, however, if anything threatens their children.  So eventually, the female hippo came to be seen as a good mother. The Egyptians then thought it obvious that a motherhood goddess would be a hippopotamus. 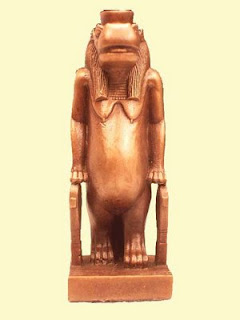 Want to see her?  Well, you can, as long as you live in the Northern hemisphere.  Go outside at night and look north (face the sunset and turn right.  You will probably be able to see the Little Dipper (looks like a spoon with the handle bent backward) with little problem unless your horizon has a lot of trees.  That is Taweret, or at least her back.  The other stars around the Little Dipper are also part of her.  This shows the importance of Taweret to the Egyptians since being this constellation means she will always be in the night sky.  Those of you who live in the southern hemisphere are just out of luck.  Taweret doesn't like you.

Despite this importance, Taweret does not have any temples to her.  She does have a lot of knick-knacks like pillows and bed headboards with her decorations.  It seems that she is best worshipped as a part of the home.

The TV show Lost shows a statue of her in season 5, episode 16.  I have never seen the show, but maybe some of you have.

Without going into details, we all know that a male must be involved with her.  In older myths she liked Apep, but eventually the myths said that she liked to hang out with Bes, a dwarf god of pleasure (oh yeah).

I was drawn to look for goddesses of pregnancy since my wife just let me know that she is, well, to keep with the season, great with child (of course I think she is great all the time).  This will be our third child and I'm pretty excited.  So expect to see a few more baby related posts in the next several months!  Once we know if it will be a girl or a boy, I'll have to have a baby naming contest here on the blog (I'm sure my wife will be pleased to name our child after a great mythological character...).
Posted by Mark Alford at 3:38 AM