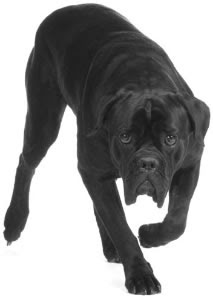 The gwyllgi is an interesting character.  It is a huge black dog that resembles a Mastiff and haunts roads at night to scare travellers.    Almost every source I find has that much information and maybe a little something else.  From looking at various sources I have found that it is also called The Dog of Darkness, Mauthe Doog, and Barghest.  There are a lot of black dog creatures in Europe and North Europe.  The Gwyllgi is the one found in Wales.    I found a whole web site devoted to the black dog phenomena, but I won't go through it now.  I'm only interested in the gwylli today.
As I continued to search, I found most sources say that when people went back in the day time to see evidence of what they saw, nothing was there.  One source that stated when someone saw the black dog their death was imminent.  That started me thinking about Harry Potter - remember book three with The Grim?

To drive things home and make it truly interesting to me, I found a "see also" reference to another type of giant dog similar to the gwyllgi - Padfoot, the nickname of the black dog "haunting" Harry at the time.  So I know that nothing in those books are accidental, but it is still fun to find where the lesser known allusions come from.
To link this to Greek mythology, you have a similar idea, not with a dog, but with Pan.  The god was known to hide in the woods near roads and make noises to scare travellers, which is where we get the word, "panic."
Posted by Mark Alford at 1:06 PM

I used the Welsh legend of the Gwyllgi as inspiration for a novella, A Leap of Knowing. In fact, I'm doing a blog about the Gwyllgi this Friday! In spite of all my research, however, I can't seem to find out how on earth you pronounce the word gwyllgi. Anyone know where to locate that tidbit of info?

By the way, I've just discovered Bubo's Blog this morning and I'm hooked! Count me as a subscriber.

Dani Harper
www.romancingthewolf.com
A Leap of Knowing is available from Cobblestone Press.

Glad to have you. I think I recognize your name. My wife (I think) has read some of your work. Even though I'm not much into romance and all (you know, got to keep up my manly image), I'll have to see about getting my hands on that A Leap of Knowing. As far as pronunciation goes, the best I can do for you is to try this web page on Welsch pronunciation: http://www.aren.org/prison/documents/celtic/25/25.pdf

Thanks for the suggestion. Actually, believe it or not, I own that particular book! Picked it up on Amazon, where a lot of obscure old books are being republished in paperback. The pronunciation guide in the back of the book is the best I've found so far, but I haven't a clue how to discern key things such as if a "w" is long or short, LOL.

Thanks for being interested in my blog on the Black Dog. Here's the site.
http://romancingthewolf.blogspot.com/