I was playing a computer game one time and accidentally set both sides to computer, so then the computer just started playing itself.  Pretty boring.  That's why I'm scratching my head at this next treasure. 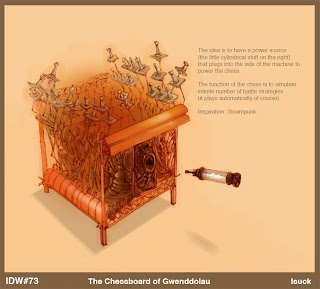 Treasure number 12 is the Chessboard of Gwenddolau (Gwyddbwyll Gwenddoleu ap Ceidio).  It is made of gold and the men of silver and when you set the pieces up, they play by themselves.  Other than the magic involved in making this happen, it would be a pretty boring way to play chess.  I guess you could bet on the outcome or maybe you could take charge of one side and play against the computer, so to speak.  The picture to the left is from Concept Art.  They have some other visions of the treasures.

Gwenddolau was a historical person, or at least his dad was.  His dad's name was Ceidio and he died 573 AD.  Gwenddolau was one of Merlin's warriors (although one account has him on the opposite side of Merlin).  His group was so faithful that after Gwenddolau's death, they continued to fight for another 6 weeks.  He owned not only the chessboards, but two birds that he yoked with a special yoke of gold.

There are other games like chess that the early Celts played and the Norse.  I found a website that has these games.  For the most part they play like they are all rooks.  The object for most is to surround the king or to get your king to a corner.  I suggest you try the Hnefetafl of the Norse.  Go here to play:
http://alumnus.caltech.edu/~leif/games/Hnefetafl/

Of course, if your tastes run toward the more Greek mythology, you should check out the 11 Mythology Gifts for a really nice chess set with the Greek gods and goddesses.

Boring yes, but possibly educational. If you could set up specific chess problems and have the board solve them for you, a serious chess nerd could get a big edge over his opponents. But then again it's 6th century Britain. Watching a chess board play itself would probably be good entertainment value by the standards of the time.

I guess. My biggest surprize was that chess was that liked at that time to be a treasure. I guess the Romans brought it in. I figured that tafl or something similar would be the game of choice during King Arthur's time.