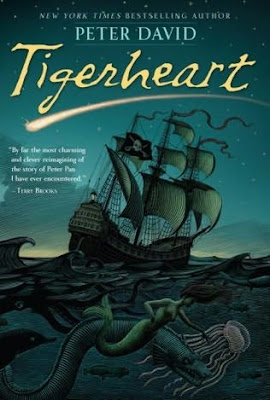 Peter David is an excellent writer, very skilled at taking existing characters and breathing new life into them.  He started with comics (Spider-Man) and moved on to the Hulk, Aquaman, and Supergirl.  Everywhere he went, the title, once lagging in sales, blew through the roof.  He had a great novel series (well, at least two out of three) on King Arthur.
His newest novel is Tigerheart, a tribute/continuation of Peter Pan.  Since the Peter Pan franchise is closely copyright guarded, he doesn't actually use the names.  Instead of Peter Pan, you have The Boy.  Instead of Wendy, you have Gwenny (which in real life is the name of the author's daughter).  Instead of Captain Hook, you the notorious Captain Hack (who has a hatchet for a hand).  They don't live in Neverland, but instead Anyplace.
To avoid the over cheesiness of ripping off another author , he pays tribute to Peter Pan's author by offering him thanks.  Although it is difficult to get used to.
This is not a book written for kids, but rather for adults lamenting the loss of their childhood.  It is not unsuitable for children (I'm reading it to my 9 year old now and he likes it much better than I do).  To me, though, this is not Peter David's best work (my son, reading over my shoulder disagrees, but since he has never read any of David's other works, don't take his advice).  But the reason I thought it worth mentioning here is the mythology connection.  Peter David has always shown a penchant for mythology in his writings (both comic and prose).  In this book, he explains why Peter Pan has such a mischievous nature by having Peter claim to be the grand nephew of Loki, the Norse trickster/shape shifting god of trouble.  I think it is a good fit.  It explains the happy-go-lucky, selfish nature of Pan.
Got extra time and nothing to read?  Pick this up at your local library.  It is a good reminder of an old story.  I give it 2.5 lightning bolts out of 5.  I would love to hear from anyone who read the book and see if they agree.
Posted by Mark Alford at 6:08 PM

Here's something else Pan-related to check out...
a new Peter Pan novel that's based on J.M. Barrie's own idea for more adventure!
Have a look:
http://peterpansneverworld.com/
Thanks for the review!
BELIEVE!

Looks great! The whole Neverland idea has such potential that if Barrie were writing now, he would have a series. It looks like this is an official version. Since this was in the works, I'm wondering if maybe Peter David was denied permission to use the right names because of this. Maybe. Maybe he just didn't want to share his profits.

Hi! I just found your blog earlier this week and I'm loving it! I'm glad to know I'm not the only mythology buff in central NC.

I would suggest reading The Child Thief by Brom if you're interested in a good Peter Pan book. It's definitely not for children as it focuses on the darker aspects of the story, which I find much more interesting! Another twist you'll probably enjoy is that Neverland is actually Avalon and several references are made to that storyline. It's definitely worth checking out!

Hi Andrea! Welcome to the blog. I have heard that I should read The Child Thief from someone else and was going to go get it, but forgot the title. When you mentioned it I remembered. I'll look for it this week. Sounds right up my alley.

If you live in Central NC too, then read this post about my visit to The Devil's Tramping Ground. The actual visit was not all that big of a deal, but the idea that we went there is one that my kids still think is cool. Here is that link:
http://bubosblog.blogspot.com/2009/10/devils-tramping-ground.html

Enjoy reading the blog and leave lots of comments!

Oh yeah, not long after I wrote this review I got a free signed copy from Peter David for submitting a small review early on. That was pretty cool.