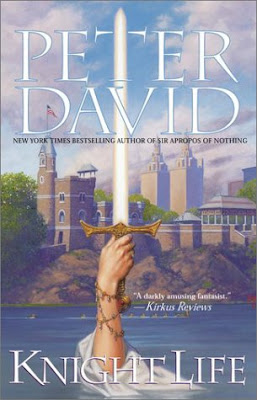 If you are a King Arthur fan and have not read Peter David's Knight Life, then I have one question for you, what are you waiting for? Peter David has a great style of writing. It is not a deep, philosophical style. It is humorous, light hearted, and accurate. Peter David is obviously a lover of the Arthurian legend and it shows. Countless times the Arthurian legend has been rewritten. This is the only time (that I know of) that the legend has been continued.
That's right. The "once and future king" is back. It is the future (here and now for us) and we are in a time of need. Arthur has returned. This time, he has come back in New York. Once just can't go around wielding Excalibur and claiming to be president, so Arthur finds himself trying to go through the election process - starting with mayor of New York. Perceval is here, having drunk from the holy grail, he has eternal life. Morgana le Fay is still around, fat and lazy after centuries of a meaningless lifestyle. Merlin, too is around. Here Davis takes T.H. White's viewpoint that Merlin ages backwards, so we see him now as a 4 year old. You don't see too many mayor candidates listing a 4 year old as their campaign manager.
The best thing about this book besides the humor is the accuracy. David knows his legends and tries to keep his story, however light hearted, true to the Arthurian tales. He wrote two sequels that, while interesting, are not quite as good.
The author has a reputation for taking existing stories and breathing new life into them. I give Knight Life a five out of five lightning bolt rating. The next book, One Knight Only I give a 3.5 lightning bolt rating, and the last book in this series is Fall of Knight, which I give a 2.5 lightning bolt rating. Despite this, I am sure that once you have read Knight Life you will want to check out the others for yourself.
Posted by Mark Alford at 2:15 PM