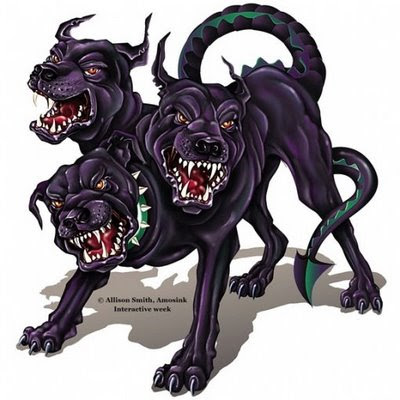 Cerberus is the dog of all dogs. Three heads (sometimes 50, depending on who you read), snake tail (or snakes for fur, once again depending on who you read), and the ability to keep all intruders out of Hades...well, that last one is not quite true.
Several people have managed to get past Cerberus. You can bypass him all together if you have a boat like Odysseus. Hercules just grabbed him by two of his throats and walked out with him. Orpheus put him to sleep by playing a lullaby. Psyche even got past him by throwing him a biscuit. I mean, come on! Pysche! She cried over each task!
Well. It doesn't stop there. Cerberus's lack of stopping people from getting past him (them?) transcends mythology and makes it on to pop culture as well. Percy Jackson throws him a red rubber ball to get past him. Harry Potter and friends puts him to sleep also by using music - thereby not only cheapening his guard skills for falling for the same trick twice, but also making Orpheus no one special (I'm mean, even kids could do what he did).
In Cerberus's favor, there was a Mythbusters special on how to get past guard dogs. You can see all their findings here: http://kwc.org/mythbusters/2007/03/episode_74_dog_myths.html
Other times Cerberus appears:
Mike Rowe on Dirty Jobs got into a row with a miner in West Virginia over the pronunciation of the dog. Mike lost.
While he doesn't get his own planet, there is a dark spot on Mars named after the tri-headed beast.
Apparently there is a movie titled after him as well. More info at http://www.imdb.com/title/tt0421121/
I found this news reference to Cerberus on the Internet:
Matt Brouillette of The Commonwealth Foundation, called state Rep. Babette Josephs, D-Philadelphia, a “minion” of House Majority Leader Bill DeWeese, D-Fayette.

“She is Cerberus, guarding the River Styx,” he said, referring to the fierce three-headed dog that is said to patrol the banks of the boundary between the Earth and the underworld in the Greek mythology.

http://christopherwink.wordpress.com/2008/07/08/greek-mythology-and-state-government-no-its-funny-i-swear/
And for those of you who want to draw the cute little thing, I found this also: http://www.drawfluffy.com/three-headed%20dog.html
Posted by Mark Alford at 1:02 PM

The agrument Mike Rowe had about Cerberus was with his field director, Dave Barsky. Mike mispronounced it, Dave corrected him and Mike asked him how he knew (in a snotty tone -- they do it to each other a lot). Dave said he had 2 years of Latin in college. Mike was a little almost a little miffed, then realized he was going to show it so he went for the humor and said, "Well, then, e pluribus unim shut-yer-pie-hole!" It was hilarious.

I forgot it was his field director. I thought for sure I remembered him arguing with one of the minors. Oh well, I'm getting old and never was good at remembering things. I do remember thinking it was hilarious as well. I love that show just to listen to Mike rant and crack jokes!