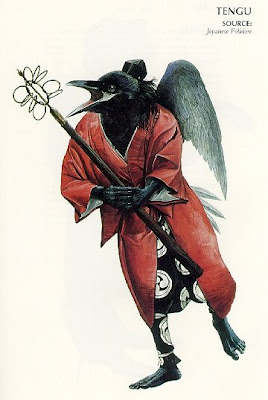 Tengu, also known as The Heavenly Dogs. So why the picture of the bird guy?  Mostly due to translation issues between Japanese characters and Chinese characters led to the transforming of cultural ideas into one creature.
Tengus (tengi?) are humanoid monsters, sometimes giant humanoid monsters.  They have a human body, glowing eyes, and the beak (usually red) and wings of a bird.  The females are especially dangerous as they have the full head of an animal and fangs and large ears and noses.
They are highly skilled in the martial arts and also highly aggressive.  If you are a warrior, go seek one out near Mount Kurama and try to defeat them and absorb their skills.  If you are a traveller, avoid them at all costs since they will make you go insane (I'm not crazy, I'm MAD!).
As the tengu legend grew, they became more tricksters, staring fires, misleading priests,  and even kidnappers of small, well, kids.
Tengu are born from giant eggs and tend to hang around tall trees.  When they take human shape, they tend to have long noses.  It is debatable from the sources I've seen if the tengu have regular bird wings or hummingbird wings.  Tengu can communicate without opening its mouth
Outside of muythology, Tengu have appeared in Batman.  Once Bruce Wayne had lost his role as Batman and took the mask of a tengu until he could reclaim his Batman outfit.
If you want, you can have a tengu for your computer: 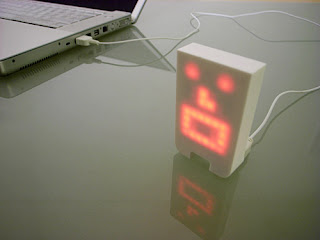 This little tengu plugs into your USB port and makes faces whenever you play music.  Why it is called a tengu, I do not know...
Posted by Mark Alford at 3:07 PM