It Just Must Not Be That Important

So how many Norsemen does it take to deliver a baby?

Wait!  Before you curse me, I'm just pointing out that the Norse didn't leave many records about childbirth.  The men were not present during a child's birth and so it just wasn't written down.  In fact, you'll find some sources that even go on to say that there is no Norse goddess of childbirth.  I guess those little Viking buggers just popped out with ease. 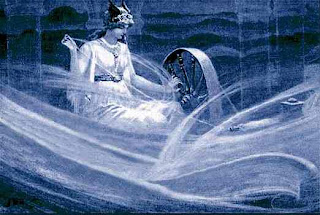 Most sources claim that Frigg is the actual goddess of childbirth.  What she does for this is rather a mystery.  There doesn't seem to be any actual prayer or ritual or story or anything associated with this fact other than several sources list Frigg as queen, protector of marriage, weaver of clouds, and by the way goddess of childbirth.  She also gets prophecy, but doesn't tell anyone what she knows.

About the only thing I found that would be associated with childbirth is Frigg's Grass, the name the Norse gave to a plant the English call Lady's Bedstraw.  It was commonly given to women to chew during childbirth to ease the pain.

So, those Norse women were just plain tough.  No need for a lot of prayer.  They literally squatted on their knees, threw out a few runes, and just had the baby (see Viking Lady for more details).  I don't think I'll suggest this to my wife, however.  I love her and all, but I don't think she is as tough as one of them.  Or, more correctly, I don't wish to have this computer shoved somewhere just for me suggesting that she suck it up and be like the Vikings.
Posted by Mark Alford at 6:14 AM

Email ThisBlogThis!Share to TwitterShare to FacebookShare to Pinterest
Labels: Norse

The Vikings might have been tough but they tended not to live long -many not past 30. Fifty would be considered extreme old age! And roughly a third of Viking women died in childbirth.

Hey Dani - well, yeah, there is that downside to being tough...

Hey Peyton - well you remember Dukes of Hazzard and that guy Cooter - 'I may be crazy, but I ain't dumb.' Well, neither am I. Although, we were coaching a swim meet the other day and the timers kept getting made at the coaches since we were trying to cheer on our swimmers and all. They kept trying to keep us past this line on the floor. One of the guy timers there actually said to my wife, "Well, you're feet are behind the line, but your stomach isn't." You know, if there weren't little kids around, I wouldn't have been able to stop her from ripping his head off!