The Legend of the Stork

We have scheduled the arrival of the stork for August.  It is a mere couple of weeks away but we do have a more recent picture of Raegan to share.  I'm sure that you will all agree that she will certainly be the most beautiful baby in history.  So, without further ramblings, here she is: 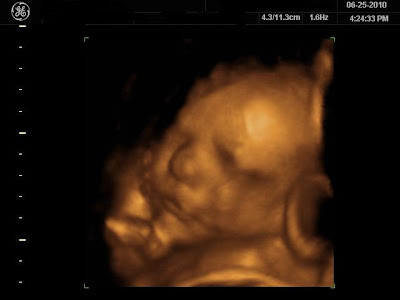 All this thinking of storks has brought me to thinking why do we have a tradition of the stork (other than not wanting to explain to children about holding hands).  So I went looking and this is what I found.

The stork legend originates in Germany with a legend that souls of unborn children live in watery areas, presumably where storks hang out.  The stork, being a noble creature, takes these souls and delivers them (in 30 minutes or less) to the happy couple waiting for a child.

Pretty simple.  Too simple.  I've been away from the blog too long, so I can't just give you a quick post and leave again (even if I do have the most beautiful baby in the world on it).  So I dug some more.

Hans Christian Anderson spices things up a bit in "The Stork."  In it there are some boys that are playing and they see some storks.  Some of the boys say that they are going to catch the birds and hang them and roast them.  For revenge, the storks decide to bring healthy baby brothers or sisters to the kids who did not say anything about killing storks and bringing dead baby brothers or sisters to the ones that did.

So, there you have it.  The legend of the stork revealed.  May a stork nest on your roof soon!
Posted by Mark Alford at 7:05 PM

Your sonogram is beautiful! She looks perfect! Congrats. :)

Thanks! With the genes she has to work with, how could she go wrong?