In order to talk about the end of the world, we first need to go back to the past.  You see, when two divine beings love each other very much . . . um . . . well, let's just say that Loki and a giantess held hands and the resulting baby was a wolf.  Don't ask me how that happened, let's just say that the reproduction unit in health class is a lot easier now than it used to be.

Anyway, they called the baby puppy Fenrir and it was love and adored by all the gods.  O.K., it was at least tolerated.  It didn't bark too much and the Norse aren't too picky about a potty trained dog.  Once they learned that the wolf would be the end of world, Tyr, the bravest of the gods, locked him up in a cage.  Only Tyr would feed Fenrir everyday.

"Hey dog!"
Woof bark bark.*   "That's wolf." (translated for you slackers that haven't studied Norse wolf)
"Right.  You look pretty weak.  I bet you couldn't break a simple chain."
Growl growl woof bark.*   "I can break anything you can make."
"Yeah, right.  You know, forget it.  It wouldn't even be worth the time make a chain."
Grrr growl woof!*  "That's because you know I can break it!"

It's not really that hard to talk a Norse monster wolf into doing something stupid.  They bring out this incredibly huge chain and shackle it around his neck.  With ease, Fenrir snaps it.  Dejected, the gods go to the dwarves and explain the problem.  For a small fee, the dwarves create the unbreakable chain.  The dwarves used some strange ingredients (the footstep of a cat, the roots of a mountain, a woman's beard, the breath of fishes, the sinews of a bear, and bird's spit) and created a thin ribbon they named Gleipnir.

This time they try the same approach.  Fenrir, however, is suspicious since they tried a huge last time and now they have a small thin ribbon.  Fenrir figures that they are either very stupid gods or it is a not so crafty trick.  Remember, he may be a wolf, but he is the son of the trickster figure of all trickster figures.  So he makes a deal.  He will allow them to put the ribbon around his neck IF one of the gods will put his hand in Fenrir's mouth while they tie him up.  Since all the gods know that once Fenrir realizes he can't break it that he will bite off the hand, no one volunteers.  Well, no one but Tyr, the bravest of the gods.  Tyr is not only a war god, but old myths have him as being top god once (before Odin takes over).  He also was the god assigned to feed Fenrir since the others were too scared.  Tyr willingly puts his hand in Fenrir's mouth and once Fenrir realizes he's been duped, he bites off the hand (that fed him!). 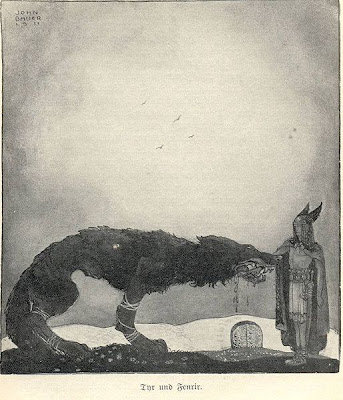 They then anchor the ribbon deep under ground and stack a huge rock on top of it.  When Fenrir tried to bite some more gods, they took a sword and shoved it in his mouth to keep him from biting down.  Fenrir now has nothing to do but to bide his time and wait for his release, which is predicted to occur at the end of time.


So the seeds for Ragnarok begin, but it is far from over.  Next time we see what Al Gore and Ragnarok have to with each other.  Until then!

Don't forget to vote for which god(s) you think will win their battle.

See all the Ragnarok posts.  Just scroll down to the bottom to start reading if you want to read them in order.
~
Posted by Mark Alford at 3:00 AM