With Fenrir locked up, things go on as normal.  Loki too gets locked up for killing Baldur, the beautiful god.  While he's stuck in a cave with a snake dripping acid-like venom on his head, Fenrir strains against his ribbon chain.  These actions are to no avail since neither creature will be free until the end.  The end starts with Fimbulvetr. 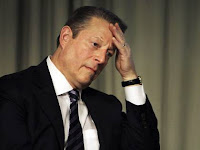 Fimbulvetr is the winter of all winters.  Actually it is three winters.  The harshest of all winters and they are so harsh that spring, summer, and fall all get skipped so that they can happen back to back (to back).   Families will begin to go crazy and fight among each other.  All morality disappears as people, desperate to stop shoveling snow, resort to all sorts of depravity.  This is why we should NOT listen to Al Gore.  Global warming will keep this harsh winter from occurring and will save all of us. That is why I have my SUV outside running and pumping as much carbon dioxide into the air as possible.

Once this happens, the end begins to speed up.  Skoll, a great wolf (not as great as Fenrir, but this wolf makes the wolf from the three little pigs look weak) will eat the sun.  His brother, Hati, will eat the moon, plunging us into some pretty heavy darkness.  On top of that, the stars will vanish (no mention of any wolf eating them). 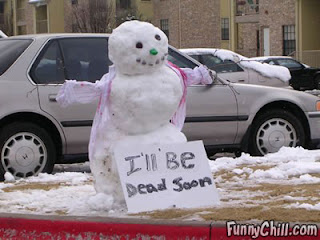 This pre-game show to the end of times ends with massive earthquakes.  These earthquakes will not only kill many humans left, but will break all things tied or secured.  ALL THINGS.  That means Loki and Fenrir will be free to play, and they aren't having good thoughts towards the gods at the moment.

See all the Ragnarok posts.  Just scroll down to the bottom to start reading if you want to read them in order.
~
Posted by Mark Alford at 9:14 PM