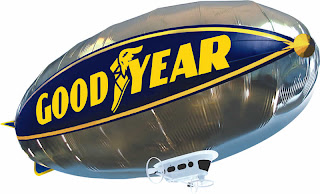 Almost everyone is familiar with the Good Year blimp and the simple logo that represents that company.  You may have even paid attention to the fact that there is a winged foot in between the words.  I wondered how closely was it to mythology and how much was it just a need to have a symbol for speed and someone chose that one.
Goodyear has a history page on their website that explains all that.﻿  It seems that the founder of the company, Frank Seiberling, grew up with a statue of Hermes/Mercury in his house.  It made an impact on him and when the time came, he wanted to somehow use this god as part of the company logo.
In 1900, a meeting was held to figure out how to make this work.  Out of several sketches, this one was the one that stuck:

This works great because of the speed symbol that a Hermes allusion brings, but also because of the fact that he is the god of commerce.  However, it was the messenger status that really led to using Hermes as a symbol.  Seiberling loved the idea of the good news that the messenger god brought and wanted people to feel that by using Goodyear products that they too were getting good news.

Can you think of any other logos with mythology allusions?