No, the title today has nothing to do with Santa, but everything to do with giants.  There is an e-mail floating around that tells of a gas explosion that revealed some bones underground.  Archaeologists came in and excavated to find an amazing discovery:

Pretty amazing, right?  All those myth stories about giants just gets a bit better.  No crack in between the eyes, so I assume this isn't Goliath!*
Not so.  You see, in the days before Snopes, these e-mails were a lot more fun.  But now, you just look it up and find out that this was merely a clever photoshop done at worth1000.com.  Here is the original that the fake was made from: 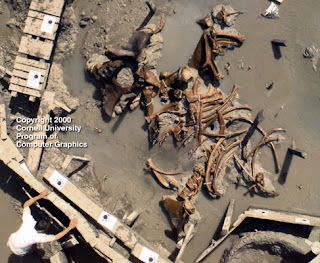 1000worth.com is a website devoted to good photoshopped pictures.  This was part of a contest.
However, all is not lost.  These pictures are also floating around on the internet and Snopes cannot find where they originated, although they say that the square-cube law makes these images impossible.  I read a little on this law. It bored me, so I didn't get very far.  I'll just try to suspend disbelief enough to say, here are some REAL pictures of giants! 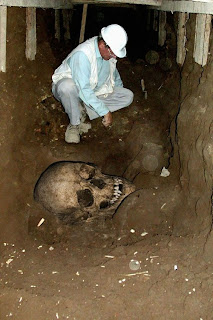 ﻿
* Couldn't be Goliath even if the picture was a real one.  According to the bible, Goliath was only about 9 feet tall.  That's not too far out of reach.  The tallest man in the world that we have record of is Robert Pershing Wadlow, he was 8 feet 11 inches. 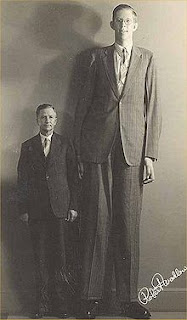 Maybe there is some magic left in the world after all!
Posted by Mark Alford at 3:23 AM