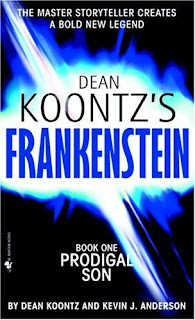 I am currently taking my time getting through Dean Koontz's Frankenstein.  It is a pretty good book so far and is a pretty good sequel to the original.  The idea is that all this happened and Shelley just got some of it wrong.  Victor survived the encounter and is still alive modern day living in New Orleans due to his science knowledge to keep him alive.  The monster, whose fate is unknown in the original, is still around as well and hanging out in a Tibetan monastery trying to find peace and enlightenment.

How does mythology fit into this?  Well, the monster has taken a name for himself - Deucalion.  Deucalion is the name of Prometheus' son.  This name was chosen for two reasons (I think).  One, the alternate title (as we talked about in part I of these posts)  for the original is A Modern Prometheus.  Prometheus, in some accounts, creating people out of clay, would mean Victor Frankenstein.  So taking the name of his son is a nod to that from the monster.  Also, Deucalion saves mankind's future by listening to his father and building a chest.  Prometheus found out that Zeus had about had it up to here with the Bronze Age.  He planned to wipe them all out with an original idea - flood them.  Deucalion and his wife, Pyrrah, hop into the chest with some food and float around for a nine day rain storm.  Being smart people, they build an altar and and pray to Zeus.  Zeus says he will let them rebuild mankind by throwing the bones of their mother behind them.  At first they are desperate, not wanting to defile their mother's grave (questionable if Pyrrah's mom - Pandora - is really even dead yet) by throwing her bone's everywhere.  Then Pyrrah figures it out.  Mother Earth is their mother and her bones would be stones.  After chunking stones behind them, they notice that the stones roll down a hill and morph into people.  Thus, the world gets repopulated.  The book leads us to believe, in this early section, that the monster is to save us from destruction since Victor plans on recreating the human race.

Victor too gets a new name.  No longer going by Victor Frankenstein - kind of hard to explain the longevity and (I'm sure) it gets old having everyone say, "like the book?" now goes by Victor Helios.  Helios is also a mythological allusion.  Helios is the sun titan who carries the sun across the sky.  Outside of this, he is not known for much except for tattle telling on Aphrodite and Ares and as a whiner when Odysseus' men eat his cows.  However, I believe this was deliberate (it's too weird of a name not to be).  Helios's connection with the sun is a symbol of rebirth.  He wants to rebuild the human population with new and improved creations.
All in all, the book is a pretty good read so far.  I can't completely recommend it yet, but if you're not reading anything good right now, it might make for a decent Halloween read.

O.K., done with Frankenstein.  Maybe I should finish that Odyssey thread I started last year...
Posted by Mark Alford at 3:12 PM

Email ThisBlogThis!Share to TwitterShare to FacebookShare to Pinterest
Labels: Greek