Swallowing Eyeballs For Your Parents or Frankenstein Mythology Part V

What does swallowing eyeballs have to do with Frankenstein?  Well, to figure this out, we need to take a look at Quan Yin, Queen of Heaven. 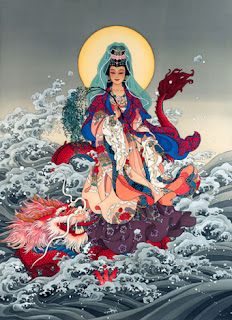 In an Indian legend, Quan Yin started life named Miao Shan.  She was beautiful, but not vain.  In fact, she led a life of self sacrifice and followed Buddha.  Eventually she attained Buddha-hood and took the cool name of Quan Yin.  Ever the self sacrificer, she denied herself heaven and decided to stay on earth to help where she could.  She wanted to help her father (a noble task, I say) and since he was blind, she wanted to fix it for him.  She took a different form so that he would not recognize her (the whole be kind to strangers for they may be a god theme).  She looked at him and said, "If you were to swallow one eyeball from one of your children, you would regain your sight."  Now, I don't know about you, but I think I would rather stay blind than to take the eyeball of one of my kids.  Maybe you feel differently, I don't know.  Anyway, her father asks each of his children (minus Miao Shan since she is dead) for one of their eyeballs.  Hey, they have one to spare, right?

I know that each of you out there would quickly gouge out an eye to help out your father.  Believe it or not, none of his stingy, worthless, suck-egg-mule kids would do this simple little task to help out dear old dad.  I know I'm shocked.  Quan Yin is disappointed that times had gotten so bad that children would not do anything for their parents.  She created an eyeball and gave it to her father, who swallowed it and could see once more.

In Dean Koontz's Frankenstein, there is a Chinese restaurant that Victor Helios goes to to get exotic food.  It seems that when you live for hundreds of years, even Taco Bell gets a little old, so he seeks out the oddest delicacies possible.  The dish he is given doesn't have a name in the book.  I have since found the name for it as Three Screams.  It was live hairless newborn rats served fondue style.  I know what you are saying, how does this relate to swallowing eyeballs?  The name of the restaurant - Quan Yin.

Godchecker has her, just spelled as Guan Yin instead. Personally, I worship her as Kwan Yin, and in Japan she's called Kannon-sama.

She's one of the most popular of the bodhisattvas and there are tons of images of her. She's also got like a million myths.

I figured she was too big of a goddess to not be in God Checker. I tried to variations of her name and nothing came up. Usually they have it so that any name variation turns up the entry. I'll have to be more diligent next time. Thanks for the update!

I knew she had several myths. I picked that one because it interested me the most (the number one qualification for entry into this blog). There is another interesting myth as to why she has so many different images and why she is sometimes depicted with many heads. Maybe I'll do that in a future post.

Hope everything is well with you. I miss your postings!