Zeus on the Loose 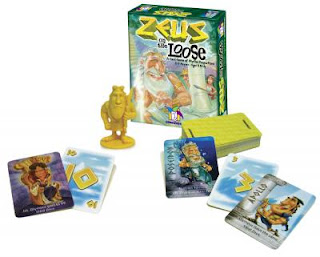 When we thought Raegan was coming early, we cut our beach trip short and rushed home to get to the doctor's office.  Luckily everything was O.K.  My wife, however, was a bit miffed that she didn't get one last chance to eat at our favorite breakfast restaurant.  So, I took her to a substitute closer to home.  After filling up on waffles and country ham, we stopped at a small toy store near by where they had toys you don't usually find at Walmart of Target.

I found a mythology based card game here called Zeus on the Loose.  Here is what the box says about this game:

Catch Zeus if you can! The great Greek god has bolted from Mount Olympus and it's up to you to nab this dashing deity. Play cards strategically, adding numbers as you climb up the mythic mountain. Grab Zeus when the total reaches a multiple of 10. Better yet, summon the strength of Apollo, Poseidon, or all-powerful Hera to bring Zeus within your grasp. Reach the top of Mount Olympus with Zeus in hand and you're a mortal among the gods. To play is human. To win, divine!


I thought it looked interesting, but my cheap side wouldn't shell out the $13 for it to find out.  I'm curious if any of you out there has played the game.  If so, post a comment giving it a lightning bolt rating out of five.  It won a lot of awards, so I figure it is probably a neat game.  You can buy it at Gamewright for slightly cheaper, if you want.
Posted by Mark Alford at 3:22 PM

I actually own the game you're talking about. It would be a fun game to play with young children, but a little too juvenile for adults. It has great artwork though. I bought my copy at Wal-Mart for a pretty low price about two years ago.

I haven't seen it at my local Wal-Mart. I'll have to give it a look. Since I'm pretty juvenile, I'll probably have hours of fun!

Thank you so much for sharing This post. It's gretful blog I have really enjoyed keeping up with you on this blog.
Nationwide Lawn stork sign rentals for Special Occasions. Our Amazing Stork Signs and Birth Announcement Stork Lawn Sign Designs are most professional Stork
visit for more information..Baby Stork sign