It was hot and Artemis was getting tired of hunting.  She knew a little secluded pool where she could slip in and take a quick bath to refresh herself.  After all, you never know when you'll need to look your best.  So she slipped out of her hunting gear and waded out a bit.  It wasn't long before she heard the tell-tale snap of a twig and turned around only to see some insignificant human spying on her.  Trying to get an eyeful of godly nakedness.  You have heard that hell hath no fury like a woman scorned, and you have heard from Linus that it is nothing compared to a woman who has been cheated out of tricks and treats, but neither of these can match the sheer wrath of a virgin goddess who has just been seen naked by a puny male.  Her punishment was swift and decisive.  This man would never dare to look upon her again.  Immediately she changed him into a stag.  With pleasure she watched his panicked face as antlers sprouted from his head, fur grew from his skin, and his hands and feet lost their digits to be replaced by hooves.  She laughed as his hunting dog, not knowing what has transpired, but eager to catch a deer for his master, chased this stag down and ripped the throat right out.  Artemis dried off and went back to Olympus, still irritated at this outrage. 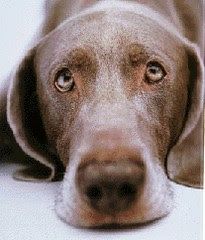 The dog waited patiently for his master to return.  Artemis, that night as she sailed the moon across the sky, saw the pitiful dog but resisted, her anger at his irresponsible master still boiling inside her.  The same scene appeared the next night, and the next. Her heart could barely take it.  She is the goddess of wild things and that does include dogs.  The next night she swooped down and scooped up the dog and rewarded his loyalty (misguided though it was) by placing him in the stars.

If you went out to look in for Canis Major earlier, then you most likely saw two bright stars above Canis Major top left of Orion.  Those two stars are Canis Minor, Acteon's faithful hunting dog.  If you haven't gone out to see it, just find Orion.  Those two bright stars left of his feet are the big dog and the two stars left of his shoulders is our little hunting dog.


* Note * The hunter's name is Acteon and he has been wrongly accused.  He actually was a bit hot himself and just stepped up to the secluded pool to get a drink of water.  When he saw Artemis in all her glory he immediately backed up to avoid looking at her and that is when he stepped on the twig.  Later, when shown the surveillance tapes of the account, Artemis only replied, "Well, these things happen, you know."
Posted by Mark Alford at 5:33 AM

Thanks, I enjoyed reading both your entries about the dog constellations