One Eyed Monstrousities and Kitties 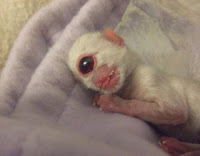 Our next stop is the most famous of stops for Odysseus - Polyphemus the cyclops.


I've already written about cyclops with my entry on Cy the Cyclopic Kitty, but since it was way back when, you may have missed it.  Here is the link: Cyclops Kitty.
Below is a recap of the story of Polyphemus.  If you're familiar with it, skip the green writing.  If not, read the green writing.  If you're color blind, tough.
Odysseus and his men are pretty hungry.  How many of his men he has right now, I don't know.  I read in one place that he had 3 boats and in another he had 12 boats.  Whatever.  In a few stops it won't matter anyway, so suffice to say, he had a small enough number to take with him but a large enough number to feel confident that they could over power whatever enemies they might find.
You all know this story - in a nutshell, Odysseus must prove here how clever he is by finding a way out of the cyclops cave.  The rock used to block the door is too heavy for his men to move, so they can't kill the cyclops.   They can't wait it out because the cyclops keeps eating the men.  So he gets the cyclops drunk, stabs him in the eye with a hot pointy log, and hides under Polyphemus's sheep when they are let out to graze. 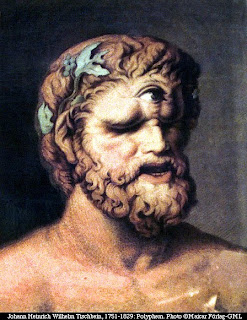 This story is also important because it shows Odysseus' hubris - his pride.  You see, he told Polyphemus his name was Nobody.  When the other cyclops came to see why he was crying, he said Nobody hurt me, so they just left him alone.  However, Odysseus couldn't bear to let this opportunity pass so he calls out to the cyclops and gives him his name, his father's name, and where he lives.  Being the son of Poseidon, Polyphemus just calls daddy whines.  Poseidon heard.  Poseidon delivered.  O.K., that doesn't do it justice.  Here is his prayer to Poseidon:
"Hear me, Poseidon … If truly I am your son, and you acknowledge yourself as my father, grant that Odysseus, who styles himself Sacker of Cities and son of Laertes, may never reach his home in Ithaca. But if he is destined to reach his native land, to come once more to his own house and see his friends again, let him come late, in evil plight, with all his comrades dead, in someone else's ship, and find troubles in his household." (Polyphemus 2. Homer, Odyssey 9.528).

Alright - recap over.  Let's look a little more deeply at the cyclops.  One of the problems is that according to Hesiod, there are three cyclops, all sons of Uranus and Gaia.  There names are Argos (dang, how many things are named Argos in Greek mythology?  Got to be a post in that somewhere), Steropes, and Brontes.  They helped Cronus overthrow Uranus because Uranus kept them locked up.  In return, Cronus locked them up in Tartarus.  When Zeus took over, he set them free.  Being pretty good at metal working, the returned the favor by making Zeus' thunderbolts, Poseidon's trident, and Hades' helmet of invisibility. Supposedly Apollo killed them when they hit his son.

The problem comes in with Homer.  He writes that they are Poseidon's sons and they are not nearly as intelligent as mentioned above.  So, to make things work, let's assume that both Poseidon and Uranus sired cyclops, but Uranus must be better at it than Poseidon.
Posted by Mark Alford at 2:41 PM