Not exactly an obscure allusion, but this news article will have to do: 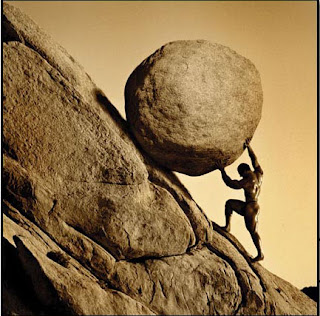 3.5 percent tax hike still won’t cut it
EAST PROVIDENCE - “In Greek Mythology, Sisyphus is condemned to an eternity of rolling a boulder uphill and then watching it roll back down again. This, it seems, is a fitting metaphor for budget and financial management in Rhode Island as we developed this budget.”
The rest of the article was sadly enough not about Sisyphus.  It is about some boring budget that I'm sure I would care about if I lived in Rhode Island.  But since I don't... (no offense at all meant toward Rhode Islanders, I'm sure it is a great place to live)
While we're here, let's discuss Sisyphus.  Most of us know the name and are familiar with the rock pushing guy.  But why is he doing this?
Well, this Sisyphus was a king.  Not just a king, mind you, but the king and founder of the city of Corinth (the same Corinth that has a book of the Bible written to it).  He was well known for being clever and tricky.  He was also the grandfather of Bellerophon.
When he died, he was so important that Hades himself came to collect him.  Now, Sisyphus was not quite ready (who is, right?) and must have been on good terms with the gods because he began to talk to Hades.  The conversation went a little like this:
Sis "Hey!  Good to see you, I've been meaning to call and all, but you know how things get."
Hades "Let's go." (Hades has never been one for small talk)
Sis "You know, I've always been interested in how you make people come with you.  Let's say that I don't want to go and wish to put up a fight, I wouldn't, you know, but let's just pretend for argument's sake.  What would you do about it?"
Hades (reaching into his back pocket) "Well, that's why I have these handy dandy handcuffs."
Sis "Man those sure are nice, but what would you use against a big guy?"
Hades "These things are stronger than they look.  They could hold Hercules himself."
Sis "Strong?  Those things?  No way."
Hades "I'm serious.  Why I bet they could even hold me they're so strong."
Sis "Now you're just teasing me.  I bet ten (whatever would be an ancient Greek dollar) that they couldn't hold someone as big and strong as you are.  Why I bet you couldn't even get them over your wrists."
Hades "You're on!"
Well, after Hades locked himself up, Sisyphus pushed him into a conveniently located closet and went on with his life.  While Hades was gone, nobody could die (which reminds me of a Piers Anthony book I read a long time ago called A Pale Horse which was about Death.  Not a bad book if I remember, but I read it in high school or jr. high, so it has been a while).  That might sound col and all, but think about the poor sap that gets trapped underwater and can't drown - lungs still scream for air and all, or the poor sap that drives his chariot over a cliff and lies in a mangled mess at the bottom, still alive.
Eventually Hades gets free and immediately sends for Sisyphus.  Sisyphus, however, was having great fun and decided that Hades was a push over.  He told his wife not to bury him when he died.  So, here he stands before Hades, ready to receive his punishment for making Hades look like a fool in front all of his god buddies and he complains to Persephone that he wasn't properly buried.  Plus, he had no coin to pay for his spot in the underworld.  Persephone, feeling sorry for him, lets him go back up to tell his wife to bury him properly.  Letting him go back up for a few moments is akin to me letting some of my students leave to go use the bathroom.  They may or may not come back.
Finally, (after another good several days) they get him back.  He is charged with various crimes (one being that he snitched on Zeus for having an affair with Aegina and another for using magic) and receives one of the most famous punishments in the world - pushing the rock up a hill for all eternity.  I bet when he gets near the top he can even see Tantalus, one of the other FFBP (Famous For Being Punished).  You know, he may even be able to see Rhode Island.
This picture below is titled, "Sisyphus Resigns!" 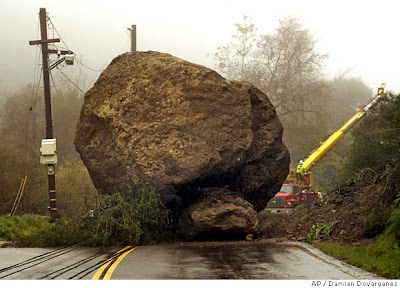