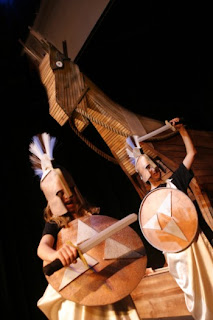 I ran across this while looking for allusions to Greek mythology (nerd that I am).  I thought this was pretty neat that these kids were having so much fun learning about mythology. Look at that horse prop and their costumes!  Pretty cool!  No school around here has done any of this.  How about you?  Anything like this where you're from?

Trojan horse is no myth at Tate Street Primary School

The play, put on by years 5 and 6 students, was The Legend of Troy and was the culmination of weeks of studying Greek mythology.

"The kids have learned enthusiasm, teamwork, persistence and personal growth because of the huge amount of work that has been put into it," acting principal Debra Stavenuiter said of the play.

Students had worked with artistic director Dave Kelman for three hours every Friday for the last 20 weeks to get ready for the play.

The Trojan horse was created by local artists Glen Romanis and Stuart Guthrie.

A $36,000 grant from Arts Victoria helped make the horse and the play possible.