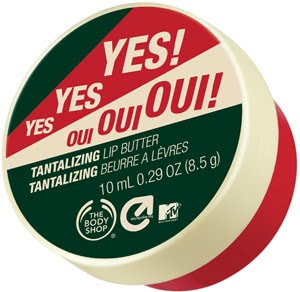 Tantalizing Lip Butter.  The jar itself is a strange thing.  I assume that it is some very thick chap stick type stuff that makes your lips super sexy (the Yes! gives me that strange idea).  I, being male, have never tried lip butter much less tantalizing lip butter.  I do remember Suzy Chapstick commercials when I was younger...  Ah Suzy, where are you now?
Anyway, on with the post.  As tantalizing as Suzy Chapstick may be, she is not mythology and we must continue on with our quest.  Back to the tantalizing lip butter.  For that matter, we don't really even care about the lips or the butter (although butter might have something to do with our tale).  "Tantalize" comes from a poor chap in Greek myth mentioned in our last post (which was so long ago - sorry, been busy).
Tantalus hated the gods.  Why?  Who knows?  There are a few ideas floating about such as he was invited to eat with the gods and just couldn't get enough of a good thing.  Some say he resented not being able to be a god (with his father being Zeus he figured he ought to be able to hang out with the deities).  The actual reason doesn't matter.  What does is that he HATES the gods. 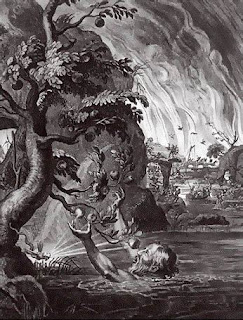 Now Tantalus must have been loved by them and he must have kept his hatred a secret.  Just like Montressor he feels that revenge is best when the victim does not know it is coming.  He invited the gods to eat dinner with him (mayhaps to return the favor) and instead of cooking up a nice pork dinner or even a delectable beef stew, he cooked his own son (I;m sure he used butter and he did cook the lips - just to tie it in with the previous paragraphs).  The gods, of course, realized this trickery and would not eat.  Well, most of the gods.  Demeter evidently is a pig since she ate her portion before waiting for anyone else to start.  They take the pieces of meat and reconstruct every part but the part that Demeter ate.  Now, if you are thinking dirty at this part of the story, you are in the wrong culture - that would be Egyptian.  The part they no longer have is the shoulder.  Demeter, a little ashamed I imagine at her dinner table etiquette, builds an ivory shoulder and they bring the son back to life.
To punish Tantalus for his evil deeds, Tantalus is trapped in a pool of water in Hades.  Some say that there is a huge rock hanging over his head to keep him in terror of dying, but I don't really like that version.  The more common idea is that he is constantly thirsty, but whenever he bends his head down to get a drink, the water drains down so he can't get any.  He is also hungry.  There are fruit trees which have fruit dangling from branches just within reach, but whenever he reaches for them, a wind blows the fruit just out of reach.
Thus the word tantalize means to keep just out of reach.  Which brings us back to the poorly named lip butter, as it is obvious from the yes yes yes! part that these lips are not meant to be kept out of touch.  Oh well, I guess our friends at The Body Shop just don't get mythology...
Posted by Mark Alford at 8:27 PM