A Guessing Game - or - Asteroids for Dirty Minded People 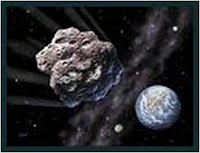 Whenever I here the word asteroids, I immediately think of Vacation when the two boys are talking and the Griswald boy asks if the kid has asteroids (referring to that great 80s video game for you young'uns out there) and the other kid says, no but his dad does and it keeps him on the john for hours.
O.K. , asteroids found around earth's orbit are called Apollo asteroids.  They are so named because the first one found was called Apollo in keeping with the trend of naming space objects after mythology figures.  I'm guessing that since Apollo flies around the earth, the name was picked (yikes, I'm talking like Yoda here).    Other asteroids were soon found and named Bacchus, Sisyphus, Icarus, and the like.  Can you guess which Greek figure (no it is not the four already mentioned) was used to name this asteroid?  A big No-prize to the person who gets it first.  I'll reveal the answer in a week or so. 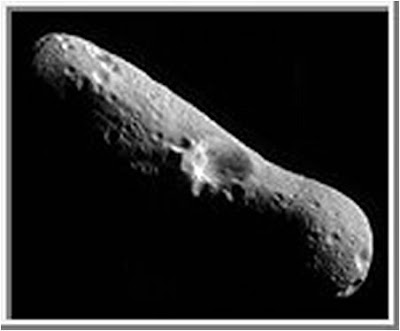 Email ThisBlogThis!Share to TwitterShare to FacebookShare to Pinterest
Labels: Greek, no prize, space

I'm guessing it's Eros because of the large crater and assuming the other, more irregular-shaped side is simply hidden.

Have you seen 216 Kleopatra? This asteroid doesn't have a mythical name but it's shaped like a dog bone! Scooby the Pug (my official muse) was very pleased.

I hadn't seen that particular one until you mentioned it. You're right. Not only about the dog bone, but about our asteroid Eros. Who says astrophysicists don't have a sense of humor? Congratulations Dani, your No-Prize is in the mail.