The Devil's beating his wife 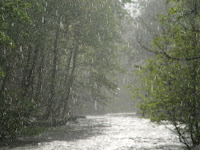 Did you ever hear that statement?  Supposedly it is a saying common with the Dutch and U.S. Southerners (because we have so much in common).  That's what I was always told when it is raining by the sun is shining.  Who is this wife?  More on that later.
In the 1800s, it was predicted that we have not one, but two moons.  This was based on the gravitational pull and the moon's orbit.  I'm not going to get into the science of it because 1. it is boring and 2. I don't really understand it.
The problem is that nobody had ever seen this moon.  It was theorized that this moon is always in the new phase - like our moon is when we can't see it.  This dark moon was named after the first woman in Christian mythology.  Lilith. 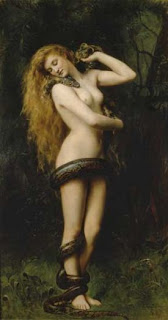 That's right, Eve was wife number two.  According to Christian legend, Lilith was  first and fell victim to the serpent's apple deal.  It seems that you women just can't keep away from temptation (mythologically and biblically speaking, of course - not my views...).  Anyway, unlike Lilith, she enjoyed being smarter than Adam so much that she didn't share her find with him.  Instead she spent her time hanging out with the serpent.  When God remade woman (Eve), He wouldn't let Lilith hang out around there and corrupt them.  So the devil took her in as married her.  Now when he beats her, we can see it!
But we can't see the moon named after her.  The search was on but no one found it.  O.K., so there is no moon, but what about the gravitational irregularity.  Well, to explain that, we now believe that we have what is called Trojan satellites.  Trojan because it is something that has snuck inside the orbit of our moon, much like the Trojan horse was snuck into Troy.  The satellites in this case are dust particles so disperse as not to be visible (although some astronomers have claimed to have seen them).  They are called the Kordylewski Clouds (a completely unmythical and therefore boring name).
Posted by Mark Alford at 7:13 PM

That was such a cool post! I love mythology.. Thanks for sharing

Glad you liked it. I saw the name of your blog and immediately thought it must be mythology related because my nerdy mind only associates pomegranates with mythology. Liked the 10 craziest Japanese products!

Haha... ;) cool... no although i love that the pomegranate has associations from ancient civilations and even mythology I named it so cause due to the allure of this magical fruit I feel I can post on all manner of subjects! In any case I look forward to reading your mythology posts! soo interesting...