And now, for the long awaited for Title Match of the Night...
Ladies and gentlemen, boys and girls, children of all ages, it is time for the heavy weight championship of the worrrrlllllllddddddddd! 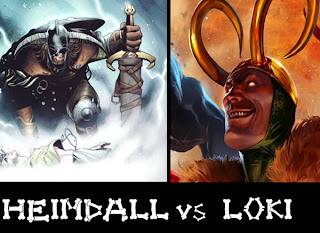 LET'S GET READY TO RUMBLE!!!!!!!!!!!!
When the earthquakes ravaged the lands, Loki was set free from his confinement.  His head ached and there was a hole in the forehead from where the poison dripped.  His wife came running to his side, but he cast her to the ground.  There will be time enough for love and for paying her back for spending hundreds of years trying to capture the poison later after taking his revenge upon the gods.  The only question now is which god should he kill first?  He sees the hosts of Hel gathering and he leads them to Asgard where his giant kinsmen await for battle.
Heimdall did not need his super hearing nor his super sight to see the coming of the forces of evil.  He sounds his horn and he too doesn't hesitate to say goodbye to his love, but instead races out to lead the gods into battle.
The battle lines are drawn.  Heimdall surveys the area.  All around him are battles between the warriors of Valhalla and the residents of Hel.  Giants are fighting lesser gods.  Far off he sees Odin and Freyr and Tyr and Garm doing battle.  Freyr and Surt are just off to his right.  While nobody knows what became of Thor, Heimdall sees him battling Jormungand as clearly as if he were next to him.  But where was Loki?  Heimdall must find out.
"Help me..."  It was just a whisper, but it was enough for Heimdall to hear it, even above the din of battle.  To his left, about 25 yards away, one of the Einherjar was about to be cleaved in half by a particularly nasty looking frost giant.  (To be honest, all are nasty looking, but this one was so much so that even his mother hid her face in shame).  Heimdall hesitated not a moment and leaped half the distance.  Yelling, he distracted the giant just enough to close the distance.  The giant forgot his prey and turned to meet a more promising battle.  Heimdall, however, was not looking for a long fight and instead decapitated the giant in one blow.  Heimdall took a deep breath and turned to face the fallen warrior.  It was at this time he heard the sound.  It was a sound much like the bending of a blade of grass, only with a bit more twang to it.  Heimdall had heard that sound before many times.  In fact, he was the only one who could hear it.  It was the sound of Loki shape-shifting.  However, the race to battle and the exertion of the beheading had slowed Heimdall enough to make hearing the sound not enough warning.
The fallen warrior of Valhalla morphed into the trickster himself.  His sword blade swung and cut into the back of Heimdall's left knee, dropping the mighty god to one knee.  Loki smiled.  He wanted Thor first, but since Thor was nowhere to be seen, Heimdall would make a good first sacrifice.  "Already bowing before me?  Well, I should take that into consideration, but I think I slay you anyway."  With that, he swung his sword quickly toward Heimdall's neck.
Without looking, Heimdall slapped his hands flat against Loki's blade, stopping its motion abruptly.  With a jerk, he dislodged it easily from Loki's grip and threw the hilt at Loki's stomach.  As Loki doubled over, Heimdall said, "There you are, three eyes."
Loki's finger went directly to the spot on his forehead.  With a sneer, he spat, "Made a joke?  Since when have you ever had a sense of humor?  You know it reminds me of..."
But of what we'll never know as Heimdall took this moment to swing at Loki's head.  With lightning speed, Loki transformed into a ram and as the sword swung by, he rammed his horned head into the god's stomach.  The armor took most of the blow, but still it knocked the breath out of him.  Heimdall grabbed the right horn and twisted the ram's head with the intent of snapping its neck, but just as quickly as before, he heard the tell-tale sign and the ram became a large eagle and flew away.
Heimdall shouted, "Come back here you coward!"  Soon the eagle dipped low and was lost to Heimdall's sight.

The battle continued to rage all around.  Heimdall continued to slay one giant after another.  Finally he stood with two warriors, panting and weary.  Heimdall heard Thor's hammer from afar and was only mildly startled by the massive blast that swept the battlefield.  His two comrades, however, were completely taken aback.  It was this moment that Heimdall noticed that one of the warriors had a wound on his forehead, right about the spot of Loki's mark.  With no hesitation, he cleaved the trickster in two.

"Your tricks are at an end, rabbit-sucker!"  Then he heard the sound.

Behind Heimdall, the other warrior transformed into a large snake and struck, biting deep into Heimdall's exposed cheek.  The god sank to his knees, grabbed the serpent by the throat, and squeezed.  The result was more poison being injected into his body and the snake's neck snapping in half.  Heimdall fell, not quite getting the satisfaction of seeing the snake transform back into a broken, dead Loki.


Who is the last man standing and winner of Survivor: Ragnarok?

Next - The Post-Game Show


Read all the Survivor: Ragnarok posts
Posted by Mark Alford at 11:04 AM