Here They Come to Save the Day!

The bad guys have amassed.  So what are the good guys doing?  Sitting around sorting socks?  Perish forbid!  They too are getting ready.  However, their preparations are not as snazzy as the bad guys. 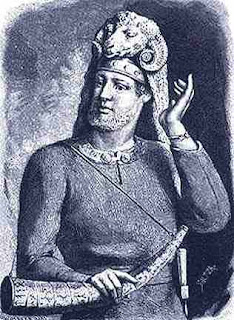 The gods have stationed at Bifrost (the Rainbow Bridge that connects Asgard with the rest of the worlds) the one, the only - Heimdall!  Heimdall not only has golden teeth (assumingly the metal and not just the color) but he also has heightened senses so much so that he can see up to a 100 leagues away and can hear grass growing.  For comparison, the longest distance recorded being seen was in a report by Korzenewsky in 1923 who saw some mountain peaks at 750 kilometers (466 and change miles) (more on this at: http://mintaka.sdsu.edu/GF/explain/atmos_refr/horizon.html).  In case you are wondering how that stacks up against a god, well, 100 leagues is roughly 326 miles.  However, Korzenewsky had perfect conditions and Heimdall is said to be able to do this night or day.  As far as grass growing, I could not find a recording of it on the Internet, but I did read someone on a forum somewhere say they could hear grass growing and that it has a distinct hissing sound.  Personally, I think that person may be a bit loony, but I'm not ready to rule out the possibility that grass does make a sound while growing.  It would be interesting to know if anyone out there can shed any light on this.

Anyway, Heimdall blows his horn to warn the gods.  I'm not so sure they really needed Heimdall for this job.  If you read the previous post, the bad guys weren't really acting all ninja-stealth.  Who answers his call?  All the gods and the warriors in Valhalla.  The warriors in Valhalla are the dead who died courageously in battle.  They have been preparing for this battle ever since death by fighting the other Valhalla inhabitant, getting drunk, and passing out.  The next day, they all rise (even those who died in the previous day training) and do it again.

They all meet on the plain of Vigrid ("battle shaker") where the last battle will be fought.  Vigrid is a flat space of land that stretches 100 leagues in every direction (good for Heimdall...).

I looked up Vigrid on Google Maps and they couldn't find it, but it did point me toward South America.  I did a Wikipedia search and found an organization that believes in Odin as creator of the universe and also says that all non-Aryan races are the cause for all bad things on earth.  Neither really helped me figure out where this battle will take place.

At this point Yggdrasil (the world tree) shakes (no mention if Ratatosk falls out) and the battles begin!


Next post - It's on!  Odin vs. Fenrir in a cage match of death!  Two men enter, Two gods enter, One god and one really big wolf enter but only one can leave!


See all the Ragnarok posts.  Just scroll down to the bottom to start reading if you want to read them in order.
~
Posted by Mark Alford at 12:50 PM