It's been awhile, but I've come back to the different stops of Odysseus.  At the moment, we have him holding on to a piece of his ship (the rest was sunk by Zeus because the men wanted to eat steak) and heading right back toward Charybdis, the maelstrom monster.  When I think of maelstrom, I think of a giant whirlpool like someone flushed the ocean.  The largest one is Saltstraumen in Norway.  I was really disappointed when I saw a picture of it: 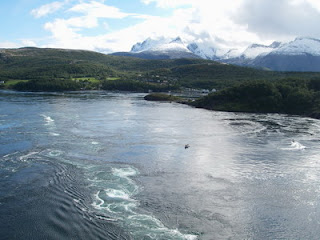 Not at all like I thought it would look.  I felt better after reading that Discovery Channel did a show on the third most powerful maelstrom, Corryvreckan, which is off of Scotland.  It is so loud that it can be heard ten miles away.  They threw a dummy into it with a depth gauge.  It got sucked down and popped up a good ways away.  The depth gauge registered 262 feet deep and it seems the dummy was dragged along the bottom for a while.  That sounds more like it.

Now Charybdis is even better than that.  It is the big flushing whirlpool in my imagination and it sucks everything down to eat it.  Every so often it spits out the water.  Luckily for Odysseus, he hit the monster right as she was spitting out the water.  It sent him flying away, free and clear, but with little hope of survival.

Here are some images of Charybdis.  She is certainly not a favorite subject for authors but I found some anyway.  The first one is a more traditional look at the monster and gets the idea of the spitting.  The second one just looks freaky and really brings out the monster look.  Kind of reminds me of the Sarlac from Return of the Jedi. 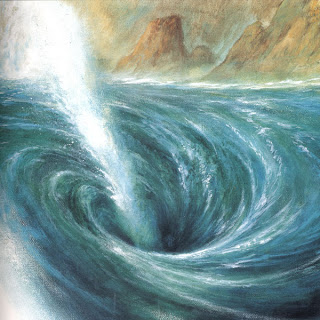 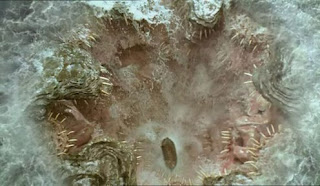 We'll leave Odysseus here, floating in the water, unable to control his destiny as he learns that there are some things he just can't control.﻿  Maybe I'll hit the next stop soon.  Maybe I'll wait until another year has passed...
First picture of Charybdis from http://galeriamit3.tripod.com/.  Second picture of Chrybdis from: http://www.bestofalltopics.com/scylla-of-greek-mythology/the-legendary-whirlpool-charybdis-of-greek-mythology/
Posted by Mark Alford at 8:58 AM