Can't Get Enough Clash of the Titans? 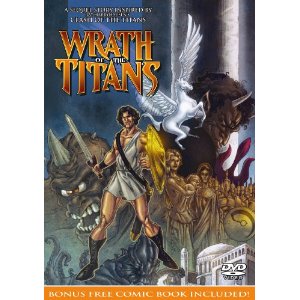 Well, try Wrath of the Titans!  I have never heard of this until just now when I saw it in a news article.  More on that later.  This DVD is a motion comics sequel to the original Clash of the Titans and picks up five years after the movie ends.   Perseus is ruler of Argos.  Andromeda is expecting a child.  Everyone is happy.  Almost everyone, that is.  Calibus did not die like we thought, but is instead lurking around waiting to get his revenge.  Buy it from Amazon and you get the DVD and the comic.  You can always give it to someone you don't like very much...  :)


Motion comics do very little for me, but I might be willing to give the comic a try.  I'm looking on the cover and I don't see Bubo, so it can't that that good.

I found a trailer for in on You Tube:

Now, what news article did I find that alerted me to this literary wonder?  I'm only calling it a news article because it popped up on Google News search result for Greek Mythology.  The source is MTV Blog and it revealed that Liam Neeson is returning to play Zeus in a new version of Wrath of the Titans.  This won't be a motion comic, but rather another live action movie.  Production begins March 2011 and will have a new director, Jonathan Liebesman.  I don't know much about him other than He directed Texas Chainsaw Massacre: The Beginning and that I have never seen one of his movies.

Rumor has it that the other major actors will return (unfortunately along with Io - nothing against the actress, I just didn't like the character) along with James Franco (you know, Harry Osborn?) who will play Poseidon's son Agenor.  I think Ares will have a role to play as well.

Too early for me to say that I will be watching it, but I'll probably pick it up on Netflix.  I enjoyed Clash of the Titans as a movie for a movie sake and I'll probably get a kick out of this one.