The Odyssey Stop 9: Between a Rock and a Hard Place Part One

Anyway, he loved it and constantly asked for more myth stories (and still does).  He drew a picture of Scylla and Charybdis which must have been the only portrayal of these monsters by a four year old ever.  I proudly hung it on my wall in my classroom and was my favorite picture that he drew.  I say was because some guys came in to service the air conditioner and ruined it.  Alas...

You didn't come here for my tragic memories, you came here to learn about Scylla and Charybdis.  We'll tackle Scylla in detail here, and Charybdis, well, we'll save here for a later post.

There are a few different origins for Scylla, so I'll pick the one I like the best.  It is a tragic love story (most of them are). 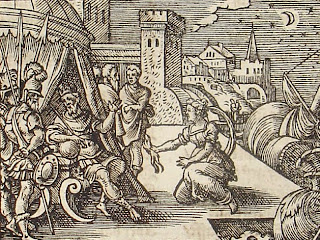 Scylla was a beautiful princess (aren't they all) who lived in a kingdom by the sea with her father King Nisus, who could not be defeated unless someone opened the gates or someone cut a lock of red hair from his head.  Eitehr way, Nisus is pretty comfortable that he is unbeatable.  One day, a king comes by to rape, pillage, and burn his city (I think it was King Minos, actually).  He did not want a long drawn out seige, so said to Nisus, why don't you just give me most of your valuables, a few girls for the trip home, and some food and we'll just go out way and nobody has to die or I'll just attack your city and kill all of you.  Nisus said, "Go ahead, make my day," (which was later plagiarized by Dirty Harry in the late 1900s).  Scylla, however, saw the young, handsome warrior and decided that she just couldn't live without him.  So, she sneaks out and tells Minos that she will hand the city over to him and then they can live forever together in happiness.  She then goes back, cuts off the red hair or opens the gates and lets in Minos and his men, who, good to his word, kills everyone.  Scylla then ran to his arms only to get smacked to the floor.  Minos told her, "If you'll betray your own father, why would I want you?"  Then he left her, crying and alone to go find a better woman (but ended up marrying someone who would rather hold hands with a bull than him - c'est le vie!).  At this point, she does what any young girl in her spot would do (keep in mind that my knowledge of young girl behavior comes from Romeo and Juliet) - she attempts to commit suicide.  Instead, Aphrodite transforms her into a bird, where she flies to a rocky island and turns back into herself.  There she stays to wallow in her pity.

There's more to this story, but before I go on, I must point out that several sources say that this Scylla is a different Scylla, but come on, how many famous Scyllas could there be?  I much prefer the sources that say she is the same as the monster we are learning about.  Encyclopedia Mythica also says that she can bark like a dog.  This has no relevance at all, but I thought it such a neat little tid bit that I would share it with you.