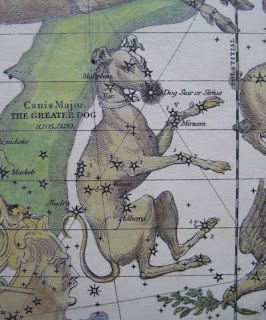 For my readers in the southern hemisphere - sorry.  This one is strictly for the northerners today.

I love going outside and looking at the stars.  It is something I have not been able to do recently as much as I would like, however.  The other night I saw a constellation that I have seen before but have never really spent much time looking at it: Canis Major - the Great Dog.

Canis Major is fairly easy to find, even if you don't pay attention to constellations.  Look for Orion.  Orion right now is  west-ish.  Look toward the sunset and then turn a bit left.  Now your are looking south and west and you should see Orion's belt looming bright overhead.  Orion's belt are three bright stars in a row and is pretty hard to miss.  You can make out Orion's head/shoulders/arms by the two very bright stars right above it and his feet by the two very bright stars right below it.  Once you see this constellation (probably the easiest to spot in the sky right now), focus on the feet and look more left.  There you will see the brightest star in the sky (besides the sun of course).  This star is named Sirius.  It is the dog star and is so bright there is no way you'll miss it.  This is the dog's head or nose (depending on who draws teh constellation pictures).  You'll see another fairly bright star near it.  If you look a bit more left and lower, you'll see a triangle of stars.  These are the tail, butt, and hind leg of Canis Major. 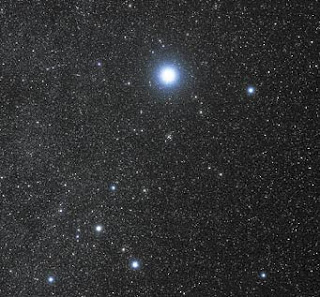 Now for the mythology side of it.  The Greeks saw this in a couple of ways.  One was looking at Orion as a hunter and Canis Major as his hunting dog.  In this scenario, Canis Major is about to attack a rabbit, which is the constellation just under Orion's feet.  Some stories say that the dog has a name - Laelaps.  Laelaps could run very fast (I'm betting that he ran very fast away from whoever stuck him with the name Laelaps).  He eventually entered a race with a fox who was the fastest animal on earth and Laelaps won.  In order to reward this spectacular display of speed, Zeus put him into the sky as a constellation.  That and the fact that Zeus had bet $50 on the dog.  Another myth has it that Canis Major and his little friend Canis Minor are sitting under the table of the Twins and are eating crumbs that are falling.

The big star, Sirius, is important too.  The Egyptians used it to monitor the flooding of the Nile River.  J. K. Rowling used the name of the dog star for her character, Sirius Black, who could change into a dog.    If you have ever heard of the saying, "the dog days of summer," Sirius is to blame.  The idea is that Sirius is rising with the sun during this time and is adding its heat to the summer days, making them so hot.  If you have a telescope ( a big one), you'll be able to notice that Sirius is actually two stars.  The second star does not add to its brightness, but actually the opposite.  Sirius is so much brighter than its companion, the the companion blocks light rather than adds to it.

I wish you clear skies and warm nights!
Posted by Mark Alford at 7:12 AM

Laelaps? You're right, it sounds dreadful. I hadn't heard about the dog's name before, so you inspired me to go and look it up. Took a while, but apparently Laelaps is supposed to mean "storm wind" and alludes to the dog's speed, which is actually kind of cool. Thanks for another interesting blog!

You know, it just didn't dawn on me to think that that awful name actually had a meaning (why, I don't know - weak moment, i guess). Thansk for sharing that!

Funny thing - I know I changed your blog address on my site, but when i looked back at it, it was back to Romancing the Wolf. I try again.