Odyssey Stop Nine: Between a Rock and a Hard Place Part Two

Last post we started to explore Scylla the early years.  The story so far - either she was this deranged princess who betrayed her father for Minos or she was a Nymph who just happened to live on this rock.


Whatever the case, our little barking protagonist finds herself on this island.  Meanwhile, some dude named Glaucus is sitting on a river bank fishing.  After catching all that he feels like catching, he dumps his dead fish ont he bank to gut them.  Low and behold, as soon as the fish touch the grass, they come back to life and jump into the water.  Glaucus does what anyone in his shoes would do, he eats the grass.  O.K., maybe not anyone in his shoes, but... 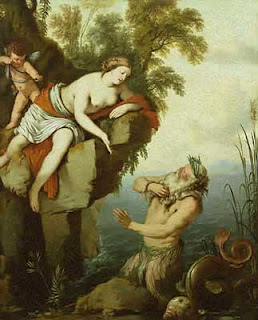 As soon as he eats the grass, he feels this urge to jump into the water.  Figuring what harm could it do, he jumps on in and turns into a minor sea god complete with fish tail and green beard and seaweed hair.

Glaucus swims around for several years just having a grand old time.  One day he stumbles flounders upon Scylla.  He falls in love with her and tries out his new pick up line, "Hey, babe, got some fries to go with that shake?" which surprizingly doesn't work.  In fact, Scylla is not at all turned on by his kelp-like charm.  Distraught, he swims over to the one woman he knows can help him.  Being a god obviously does grant you infinite wisdom or else he would have known that you never, EVER go to a woman about being in love with another woman.

Glaucus goes on talking about how he can't live without this special someone.  Circe is all flattered thinking he is talking about her, but when he lets it out that he is in love with Scylla, Circe does what she does best.  Get even.  She tells him to pour this potion into her bathing pool and when she bathes, she will fall in love with Glaucus.  He eagerly takes it and runs swims off.

Sneakily he climbs up and slips the potion into her pool.  This is no easy task since he does not have legs.  When she bathes, the potion does its work - only the work is not to make her fall in love.  Instead, Circe gets Glaucus for daring to love another by turning Scylla into a monsterous creature.  She grows ten feet that root into the ground.  She sprouts six long, snakey necks that have a dog head on each.  She develops a craving for human flesh.  Glaucus, horrified, swims off a wiser man.

When Odysseus sails past her, he purposely sails close to her.  The result is that he loses six men as her heads shoot down and snatch them right off the oar benches.  If he had sailed away from her, he would have run the risk of losing his own ship to Charybdis, the monster next door.  But Charybdis is another story for another post.
According to the Aeneid, she is just a dangerous rock.  Kind of anti-climatic, if you ask me.

Next Stop - Eat More Chicken!
Posted by Mark Alford at 6:58 AM