Revenge! Always a good plot line and story motif. It is the source of many a wise saying, such as:

"Women do most delight in revenge." -Sir Thomas Browne

"Anyone can rat, but it takes a certain amount of ingenuity to re-rat." -Winston Churchill

We love revenge and revel in it, which is why the Greeks invented Nemesis, the goddess of revenge.

We should not get her confused with Nemesis, the character from the Heroes series. 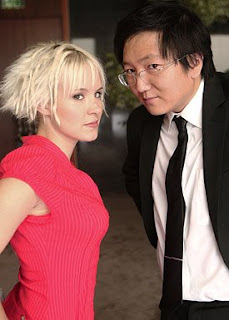 No, Nemesis is an awesome being, and beautiful too. I would have pictured her more fearful in appearance, much like the furies. Even Zeus found her to be worthy of pursuing (although I'm not so sure that Zeus should be the standard since he seemed to find all women worthy of pursuing).

Her job was to punish those with excessive pride, those who performed evil deeds, gluttons, and those who did not deserve the happiness they had in life. Tyche (Luck) frequently was irresponsible, much like Eros, in handing out luck. Those who got too much luck found themselves faced with the great equalizer, Nemesis.

When you see Nemesis in paintings or sculptures, you will probably see her holding things - 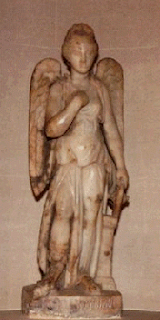 either an apple branch, rein, lash, sword, or balance. Some of those make sense to me. The rein because she controls your future, if she wishes to, the lash and sword because of her punishing nature, and the balance to show that she balances out blind luck. But what about the apple branch? I'm not sure about that. I'll have to rely on A. Venefica at Symbolic Meanings to help me out there. You'll also see her with wings, but only if it is a later painting. Original depictions of her do not have her flying around. Other common things with her are ship rudders and ship wheels to show how she can guide people.

The Romans beefed her up a bit by giving her a chariot drawn by griffins. That's what i like about the Romans. They have cool chariots, unlike the Norse who have chariots drawn by goats, cats, and swans. Losers.

But what about space. I said earlier that this is my last space post and I have yet to mention it. Well, Nemesis may or may not exist in space. Let me explain. 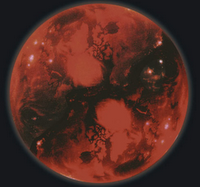 Beyond the Kuiper belt lies the Oort cloud, a supposed resting place for tired comets. Some scientists have suggested that there is a dark star, a companion to ours that hits this cloud every 30 million years (give or take a decade), sending some of these comets our way. These errant comets will then pound Earth (all the other planets) causing enough global disaster to make Al Gore go crazy. This, according to these scientist is what has caused other massive extinctions in the past.

This view is not widely held, but is growing support. Be wary, we only have a few million years left before it comes back again!
Posted by Mark Alford at 7:40 AM