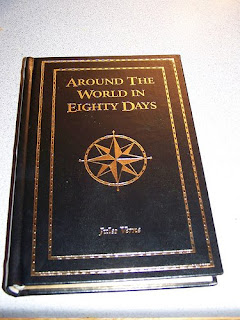 The English teacher nerd in me saw a book with seven Jules Verne novels and said, "Hey, Mark, buy this and read some great Victorian literature over the summer."  Since the cool part of me was somewhere else at the time, I went ahead and did.  I read the titles to my 5 year old and asked him which one should I read first and his response was Around the World in 80 Days.  Since I was sure that the movie version with Jackie Chan was probably not very true to the book, I started.  Let me tell you, the English teacher nerd in me is very happy with that choice.
Once Phileas Fogg got to India, the mythology nerd in me got interested.  While crossing India on elephant, Fogg runs across a procession about to make a human sacrifice, or suttee.  Seems that a rajah had died and they were about to burn his corpse and, of course, his wife.  The wife, still being alive and all, was not all that happy about it.  The idea is to appease Kali, the goddess of love and death (as described in the book). 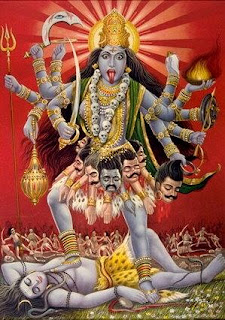 This was interesting to me since the only thing I really know about Kali is from The Temple of Doom, and I am sure that the suttees that took place in history didn't really have people getting their hearts removed and still living while the rajah held the still beating heart.  So, I did a little searching.
Now, as a little disclaimer, I usually do not talk about religions still being practiced as mythology, but I am making another exception here (as I have done on numerous occasions).  Anyone viewing this that can shed better light on the worship of Kali because they actually worship Kali or know people who do are free to correct me in the comments section.
Kali is known as the Dark Mother and sports four arms on each side.  Most pictures I saw of her had her wearing human heads and a belt of human arms.
Kali was born from the eyebrow of Durga, another goddess, while Durga was fighting evil.  Kali immediately joined in the fray and got so carried away that she pretty much destroyed everything.   Shiva stopped her by laying down in front of her feet.
As fearsome as she looks, her image is highly symbolic.  She wears fifty heads as symbol of her infinite wisdom (there are fifty letters in the Sanskrit alphabet).  She wears no clothes to symbolize nature.  Her white teeth show her inner purity and her sword is the destroyer of false consciousness and the bonds that bind her followers.  She has three eyes that represent the past, present, and future.
The suttee was associated with Parvati, which by some sources I found, is an incarnation of Kali, which is why my book makes the association.  These dark sides of Kali and other deities are not worshipped as much today.  The most recent suttee was performed in 1987.  Personally, I feel that a woman should rather be burned alive than to live without her husband.  Makes sense to me.  Think I'll mention that to my wife tonight.  I'm positive she'll agree.
Posted by Mark Alford at 9:43 PM