And I Thought I Was Bull Headed

You saw the title and thought this would be about the minotaur, right?  Wrong.  This, my friends, is about the Ophiataurus.  My son and I were reading along in The Last Olympian and good old Bessie reappeared.  Bessie was the half bull half serpent creature that the book's hero, Percy, rescued and gave to the gods for safe keeping.  They keep the creature in a big fish bowl on top of the Empire State Building (the new home of Mt. Olympus).  The fact that the creature is male was only revealed after Percy named it Bessie. 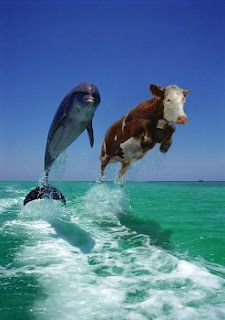 Anyway, the actual mythological reference is to Ovid's Fasti.  His mom is Gaia and when he was born, he was imprisoned by the river Styx
(uncertain if he was trapped in it or what).  Apparently this little guy has one purpose.  Anyone who kills the creature and burns the bowels (nice alliteration there, don't you think?) will be given the power to defeat the gods.
Bessie was killed in Ovid's work by Briares, one of the hundred-handed, fifty headed giants.  Zeus, pulling a page from Gandalf, sent eagles to pick up the spilt innards before they could be burned.
So what's our lesson here?  If you want to defeat the gods AND you have access to an Ophiataurus, then have the fire ready BEFORE killing the thing and disemboweling it.  Handy life tip.
Can you believe that nobody has a picture of this swimming cow-snake on the internet?  That's why I settled for this one.  Yeah, I know this cow here is brown skinned and the real deal is black skinned, but hey, you gotta make sacrifices sometimes.

By the way, Briares uses an adamantine axe to kill it.  I think that weird because I've only seen that word used before when referring to the metal that covers Wolverine's skeleton.  I really need to check up on my periodic table, I guess.
Posted by Mark Alford at 9:15 AM

Gotta love your since of humor published here It would be fairly simple to turn this blog into a piggy bank come and visit Online success: My Report To See Several gimmick free methods I use To make online funds grow Im sure theres is at least one idea you can pick up from reading it