Tribute to the Unknown God 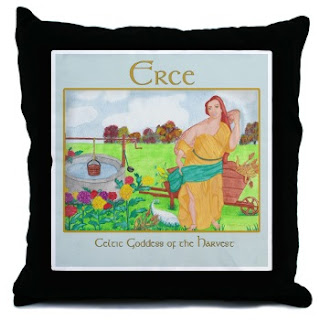 I know you're thinking that I don't know what I'm talking about when I include Mother Earth as an unknown god (or goddess in this case).  See, that's where you underestimate me.  I'm not talking about Gaia.  I'm talking about Erce, the Saxon goddess.  You can see her here on a nice throw pillow available at Cafe Press.  They call her the Celtic goddess of the harvest, but they are wrong.
I set out to find some information about her after reading her name in another one of Bernard Cornwell's books (this one on King Arthur).  Turns out, not too many people know about her.  One of my standard checks for obscure deities is usually God Checker, but they didn't have her.  I then went to the goddess expert, Goddess-a-Day, and Erce wasn't there either!  I knew then that I was either onto something, or Cornwell just made it up.  Since the latter was unlikely, I continued my search.
Eventually I found this excerpt:
'Erce, Erc, Erce, Mother Earth,
Hail to thee, Earth, mother of men,
Be fruitful in Gods embrace,
Filled with food for the use of men'.
These few lines of poetry are all we have of this Saxon goddess.  This charm is pre-Christain in origin, so it gives us a rare glimpse of mythology in a pre-Christain England.  Since many of the Saxons beliefs became mingled with Norse and Christianity eventually, it is neat (to me at least) to see this.  Some scholars have compared her to other Anglo-Saxon figures, such as Nerthus, Hretha, and one I had never heard of, Frau Herke.

Some say that since Erce is repeated three times, that she must be a triple goddess, maybe relating to the three seasons (fall didn't really exist as a separate season in most cultures until later).
Of all the references I found to Erce, the weirdest was this (obviously no relation) from
Posted by Mark Alford at 9:51 AM