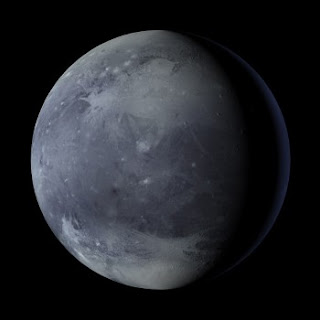 O.K., back to our journey through space.  I got a bit distracted in the process, we are finally at Pluto.  Only two more stops to go!
Now, Pluto was a planet, but is now no longer a planet for reasons we will discuss when we get to the next stop in space.  Let's just say that I am not very happy about this and my nerdy self has not yet gotten over it.  I understand why, I just like Pluto.
Pluto is almost impossible to see, which is why it took so long to find it and why it earned the moniker of the formidable god of the dead*.  Pluto (Greek - Hades) has a helmet of invisibility, so the astronomer was being rather clever when he he chose Pluto as the name.
One of Pluto's problems is that it is very small.  In fact it is less than 3/4 the size of our own moon.  It has three moons itself, despite the small size.  The first to be found was named Charon, after the ferryman of souls on the river Styx.  For a while astronomers did not know if Charon should be a moon or classify Pluto and Charon as a binary planet system since Charon is almost the same size as Pluto.  There are two other moons, both very small that are not yet officially named.  Unofficially they are Hydra (after the monster from Hercules fame - I think Cerberus would be a better name) and Nix (night - a divine being that is so powerful that even Zeus is afraid to challenge).
* There is some argument about Pluto being the god of the dead.  Technically, Pluto is the Roman god of wealth.  Dis is the Roman god of the dead, counterpart to Hades.  Over the years, the two basically have gotten merged in our minds as one.
Disney created their famous dog character the same year that Pluto was discovered.  When the news was released that Pluto was demoted to a dwarf planet, Disney issued their own press release:

BURBANK, CALIF (Thursday, August 24, 2006) – In reaction to news today that Pluto was demoted to the status of “dwarf planet,” the Seven Dwarfs issued their own short statement:

“Although we think it's DOPEY that Pluto has been downgraded to a dwarf planet, which has made  some people GRUMPY and others just SLEEPY, we are not BASHFUL in saying we would be HAPPY if Disney's Pluto would join us as an 8th dwarf. We think this is just what the DOC ordered and is nothing to SNEEZE at.”

As Mickey Mouse’s faithful companion, Pluto made his debut in 1930 – the same year that scientists discovered what they believed was a ninth planet.

Said a white-gloved, yellow-shoed source close to Disney’s top dog, “I think the whole thing is goofy. Pluto has never been interested in astronomy before, other than maybe an occasional howl at the moon.”
Posted by Mark Alford at 4:10 PM

Please do not blindly accept the controversial demotion of Pluto by four percent of the IAU, most of whom are not planetary scientists. Their decision was immediately opposed by hundreds of professional astronomers led by Dr. Alan Stern, Principal Investigator of NASA's New Horizons mission to Pluto.

Pluto IS a planet because unlike most objects in the Kuiper Belt, it has attained hydrostatic equilibrium, meaning it has enough self-gravity to have pulled itself into a round shape. When an object is large enough for this to happen, it develops the same geological processes as the larger planets, processes that inert asteroids and most KBOs do not have.

The IAU definition makes no linguistic sense, as it states that dwarf planets are not planets at all. That’s like saying a grizzly bear is not a bear. It also departs from the traditional use of the word "dwarf" in astronomy, where dwarf stars are still stars, and dwarf galaxies are still galaxies.

Second, it defines objects solely by where they are while ignoring what they are. If Earth were placed in Pluto’s orbit, by the IAU definition, it would not be a planet. That is because the further away an object is from its parent star, the more difficulty it will have in clearing its orbit.

Many believe we should keep the term planet broad to encompass any non-self-luminous spheroidal object orbiting a star.

We should be broadening, not narrowing our concept of planet as more objects are being discovered in this and other solar systems.

I attended the Great Planet Debate, which actually took place in August 2008, and there was a strong consensus there that a broader, more encompassing planet definition is needed. I encourage anyone interested to listen to and view the conference proceedings at http://gpd.jhuapl.edu/ You can also read more about this issue on my blog at http://laurele.livejournal.com

You can find the petition of astronomers who rejected the demotion of Pluto here: http://www.ipetitions.com/petition/planetprotest/

Fantastic comment! I do agree that a better definition of a planet needs to be created, especially (at least from my limited understanding) since Jupiter has Trojan asteroids and so has not cleared its orbit either, but nobody is denying its planetary status. We do need a definition that excludes asteroids and inert comets and such and I've liked the planet being round idea (although I never can remember the term hydrostatic equilibrium. I'll check out the petition and your blog soon!