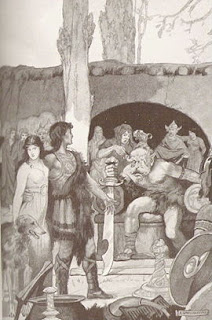 Apparently, a young man by the name of Culhwch, fell in love.  He fell in love with the daughter of a giant named Ysbaddadan, who was not interested in his daughter marring such a cocky young man (that and the fact that if she gets married, he will die).  Young love, however, is not easily deterred and Culhwch accepts a challenge to collect 39 things.  All these things are virtually impossible to find and, when found, belong to people who are not willing to give them up ro unable to get rid of them.  That does not stop our young hero, and off he goes in search of the treasures.  One of the treasures is also the second treasure of Britain. 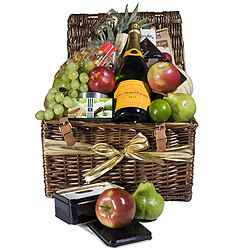 The Hamper of Gwyddno Long-Shank, or otherwise known as Mwys Gwyddno Garanir.  It is said that if you put food for one man in it, you'll open it up and find food for a hundred men. 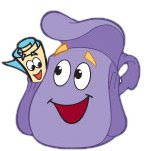 It seems this Long-Shanks fellow was lord of a place in Wales named Catref y Gwaelod, but don't break out your handy dandy map to find it just yet.  The whole place was flooded and is wiped from the face of the earth to join the sea forever.
Culhwch eventually got all the items, but not without help.  King Arthur and his knights joined the hunt and helped him out.  When Culhwch gets back to him, you might would think that Ysbaddadan tried to back out of the deal, but, with somewhat refreshing originality, the giant puts Culhwch down for not finding all the items himself.  As soon as he does, another warrior who evidently was just sitting around waiting for this opportunity, leaps up and decapitates the giant in one blow!
Now I'm hungry!
Posted by Mark Alford at 3:36 AM