Let's look at the thirteen treasures of Britain - thirteen items that when brought together will bring the gods back to England or will give the humans power to overthrow the intruding gods.  However you want to look at it, it is a fascinating idea that is lost with the King Arthur tales.  If King Arthur is Christian, then you want him going after Christian artifacts like the holy grail.  If King Arthur is pagan, well, you want him to go after less Christian things.
These treasures according to 18th century scholar Lewis Morris,  All of the treasures were taken to Bardsey Island and placed in a glass house (which, as we all know, is NOT a good place to throw stones or feed seagulls).  The earliest written works about the treasures (also known as
the hallows - a possible source of the Harry Potter Hallows) only mentions their names and that they are treasures "from the North."
So, here is the first treasure: 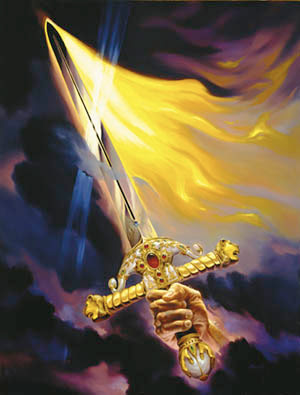 White Hilt (the Sword of Rhydderch the Generous):  Rhydderch Heal was king of Strathclyde from 540 AD to 614 AD.  It was said that he owned this treasure and was willing to offer it to anyone - thus the title of Generous.  However, this sword has a peculiar design.  When a "well born" man drew the sword, the whole blade would burst into flame (a la Thundarr the Barbarian).  Nobody, for fear that it would not burst into flame for them, ever took Rhydderch the Generous up on his, well, generous offer (just imagine the embarrassment).  This treasure is also known as Dyrnwyn, gleddyf Rhydderch Hael.  Don't ask me how to pronounce it! 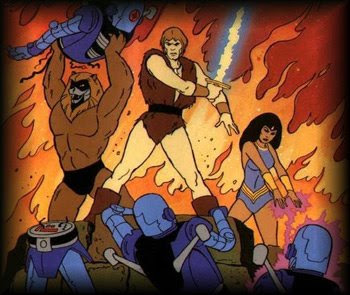 Email ThisBlogThis!Share to TwitterShare to FacebookShare to Pinterest
Labels: 13 Treasures of Britain, Celtic