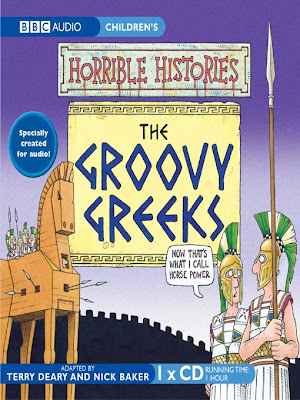 While this book (yes, I know I used the audio cover here, but the book cover is essentially the same) is obviously a kids book, it doesn't shy away from giving good information in a fun to read format.  It is a series called Horrible Histories which includes The Vile Victorians, The Vicious Vikings, The Rotten Romans, and The Angry Aztecs to name a few.  They have a way of making history fun with really corny jokes (as you can see from the cover) - kind of a Monty Python does history sort of thing.
My son came home with The Groovy Greeks from a school book fair.  He paid 25 cents for it and only picked it because he thought it might have something about mythology in it (yes, he is as geeky as his dad).  It does.  It has a whole chapter about them called The Gruesome Gods and throughout the book it refers to the gods since so much of what the Greeks, I mean the groovy Greeks, did was done because of their belief in the gods.  The back of the book entices you with these questions:
Who wouldn't???  (want to know, that it - not taste ear wax!)
One of my favorite sections is Clytemnestra's diary where she repeatedly refers to Paris as "that nice Paris guy" and Electra and Orestes as an "odd couple."  It also lets you know that in Corinth, you could speak directly to the gods.  At the oracle there was evidently a room underground from which a priest could listen to the request and then yell out the answer which would make it sound as if the gods were speaking.
It is a neat little book that is worth more than just a quarter.  Although in one part it asks if you think your teacher would did a noble death like Socrates, but then adds that "unfortunately" you won't be able to find out since hemlock can't be found in your local pharmacy.  UNFORTUNATELY!  You can see more of what these people are about at their website: http://www.horrible-histories.co.uk/.
I'll give it 3.5 lightning bolts out of 5 and definitely recommend it if you have kids or teach kids.  Like I said, it is a fun read and full of information.   If I ran across one of the others, I'd probably pick it up ... for the kids of course ...
Posted by Mark Alford at 1:15 PM