Tribute the the Unknown God

We here at Bubo's Blog have had a tribute to the unknown god entry before.  Basically, it is a review of a lesser known deity (or at least lesser known me).  I have had ten entries (something I need to correct) and of them all, my favorite is "Eating Hearts and Reading Comic Books."  Today, however, I really want to know more about the actual unknown god, or at least how the Athenians saw him. 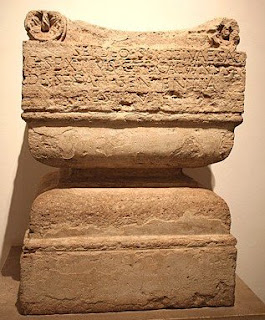 According to the story, Athens was bothered by a plague.  They couldn't figure out why this problem was, well, plaguing them so.  One chap by the name of Epimenides came up with a good idea.  Rather than spend a lot of time sacrificing to the wrong god and only getting the one that is upset with them even madder, he suggested letting a lot of sheep loose and whenever they stopped and laid down, sacrifice it to the god of the area they laid down in (apparently the Greeks had most of their little corners and niches dedicated to this god or that goddess).  The idea was working great, except a few sheep kept laying down in areas that were not dedicated to any particular deity.  Epimenides suggested that they build an altar and dedicate it to the unknown god.  He said that this must a pretty powerful god and wouldn't mind that they didn't know his name.  This covered all their bases.  The plague stopped and you had one very happy unknown god and several dead sheep.
The Greeks called this unknown god, Agnostos Theos.  This practice wasn't limited to Athens. The altar you see here is a Roman altar dedicated to an unknown god.  The Romans were very concerned about offending any deities, which is one reason that they were pretty liberal in accepting other cultures' gods and goddesses as the empire spread.  In fact, the Romans were happy to have people worshipping their own gods after they got taken over - the only catch is that they needed to worship the established Roman ones too.  This is one of the reasons that the Jews and early Christians had so much conflict with the Roman Empire.  If you believe in one and only one god, a god that has specifically said, "Hey!  No worship

ping other gods and goddesses," then you can see where the problem comes in.
In fact, in Acts chapter 17, Paul (about 50 years later) is walking down the streets in Athens and comes across one of these altars and comments on it to the people of the area, suggesting that the unknown god they are missing is really the one and only God.
I guess it is a good point by the Athenians.  Ignorance my be bliss, but when you neglect a god because of it, then that's just ignorance.
Posted by Mark Alford at 2:40 PM

I'd always wondered how the "unknown god" thing got started. Seems like a good idea to cover all one's bases!