Ah the moon! A thing of beauty, a time keeper, an eye in the sky, a regulator of tides, destroyer of enemies, eater of hearts, and giver of powers.

It is the last three that we talk about today. To do this, we need to go way, way, way back in Egyptian mythology to a god named Khonshu (with variant spellings like everything else in mythology). The Wanderer, Embracer, Pathfinder (no, not as in the movie of Vikings and Native Americans nor in the spirit of Natty Bumpoo), and Defender are just a few of his appellations.

Just as Artemis is associated with the moon and with wild animals, so is Khonshu, but he also has added benefits of helping both men and women with the act of conceiving little ancient Egyptians, healing, and cow fertility (which he is best at during the crescent moon). His weirdest name is King's Placenta. It was said that he protected Pharaohs by killing their enemies and taking their insides back to the Pharaoh. What they did with them, I don't know but eating them may have something to do with as he is also The One Who Lives on Hearts.

When shown in art, he has the head of a hawk or falcon with curved horns. The moon fits in those horns much like the sun fits on top of Ra's head.

Oh yeah, and he loves games, senet to be exact, and he is always gambling on it with Thoth. One would think that with the moon, eating of hearts, and pregnant heifers that he wouldn't have time for games, but I suspect he was also a good multi-tasker. Actually, the real reason is that people loved to worship him, just they didn't know quite what to do with him. The ancients had him as powerful, even helping with the creation, however, over time, he stopped eating hearts and lost his importa 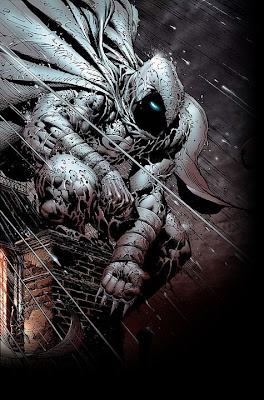 nce. That's how one goes from destroyer to cow fertility specialist.

Oh, and his temple is in Tanis - that's right, where Indiana Jones found the lost ark.

No matter what the Egyptians thought, he will always be one thing to me. The god of Moon Knight. Yes, you heard me, Moon Knight - the American mercenary turned Egyptian follower knock off of Batman (rich guy running around in tights fighting crime). In one run of his series his powers waxed and waned with the moon (the more full, the more powerful, and vice versa). He was my friend's favorite hero (second only to Spider-Man, of course) and had the distinction of have not just one secret identity, not two, but three secret identities. Of course, the destroyer part of Khonshu played a bigger part as I do not remember Moon Knight ever making cows fertile (but then, I didn't read all of the series).

Thanks for recommending... I like it. Egyptian mythology fascinates me, but I've never really studied it. I need to read up on it.