One, check out The Pomegranate Blog for a poem about Icarus.  It is translated and written in its original language.
Two, I just learned something today and wanted to pass it on.  I know that you, I'm sure, have already known this for some time, but, well, it is new to me.  I've always thought Pandora had a box.  You know, Pandora's box - right?  Well, the Greek poet Hesiodus said she had a pithos, this is (so I'm told since I don't speak Greek, maybe Ailia can help me since she can) a jar for storing grain.  Everyone went along for years saying Pandora's jar until Erasmus published Adagia, in which he translated it as box.  Since he was so widely read at the time,
the use of box became more common than jar.
I don't know what is worse, the fact that I, while never claiming to be a scholar, didn't know this or from the fact that I learned it from a children's book
my son checked out of his school library. 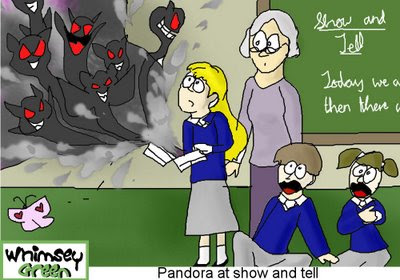 I think part of the reason it's so ubiquitous is because everyone PAINTS boxes and not jars.

Oh my. I always thought it was a box too! Pandora's box... wow like u said... lost in translation! what a shame.. although "jar" doesn't really have the same ring to it does it? ;)

That comic reminds me of a teen series that's being written. Pandora actually does take the box to show and tell, causing the huge fiasco. The series follows her quest to recapture all the evils. Pandora Gets Jealous is the first one. It's actually a lot better than I was expecting it to be.

PS. I'm work in a library and I have a Classical Civilization degree. That's why I keep sending you book suggestions!

Pandora Gets Jealous sounds just like the book to get my little girl when she gets a little older. Thanks! Keep those book suggestions coming. I love them. What kind of library do you work in? School or public?

I work in a public library near a lot of schools so I get to interact with a lot of students. I enjoy reading young adult books so I tend to focus my reading there.

There is a children's series about the Greek gods and goddesses in school but it's a little too cutesy for my taste. I made it through the first three before I finally couldn't take it anymore. I just couldn't stand watch Artemis make googly eyes at Orion! It's called the Goddess Girls series and the first book is Athena the Brain.

Just the name Goddess Girls - sounds awful! I'll have to look into them for a review. I could use a few bad reviews on here. I don't want everyone to think I'm too soft!