Astronomically speaking . . . yes.  But more on that in a minute.
So, to the question I asked a while back - What planet comes after Mars?
Scientists are really smart people.  These guys (Titius and Bode to be exact) figured out that the planets exist in a proportional distance from each other.  They tried it out and sure enough it worked all the way until Saturn, which at the time was the last known planet.  Well, it worked until they got to Mar and Jupiter.  You see, there is no planet where there should be between Mars and Jupiter.  So people started looking harder.
Lo and behold.  The best way to find something is to look (and save time by looking int he last place since that is where things are usually found).  Someone found a planet right where it should be.  The problem was it was small.  Very smaller.  Much smaller than our moon.  They named it Ceres.  Then they found another, and another and another.  All of these were smaller than the first one.  Eventually scientists realized that in this orbit where a planet should be, there are millions of rocks (large rocks, mind you, not like a celestial gravel driveway or anything).  These became known as asteroids.  They are really hard to find because they look like dim stars and you have to record all the stars in that area over a period of time and see which one is moving.
Back to Ceres.  This asteroid is round and behaves like a planet.  So people wanted to call it a planet, but since it is too small and just the big dog of the asteroids, nobody did it and now it is too late (we'll talk about why when we hit Pluto (for which I am still angry about (look! I am so angry that I am over parenthesizing! (Wow!  spell check says that parenthesizing is a word - who knew!)))).
This is a mythology blog, so let's get to it.  Ceres, the goddess of corn and agriculture is the obvious name for this planet/dwarf planet/ asteroid since it is a rock with no atmosphere, barren of all life.  Oh well... 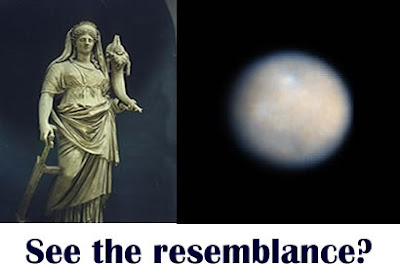 But hey!  I shouldn't be too hard on the scientists.  They were trying to keep the Roman names going - did I say Roman?  The second largest asteroid was named Pallas, another Greek name :(
There are no other myth names for Ceres since it is not noticeable with the naked eye.
Posted by Mark Alford at 11:40 AM