Sexist, Chauvinistic Gods and the Women Who Love Them

Each moon of Jupiter is named after someone Jupiter was close to. There are at least 52 and may be more than 100. If you look through a telescope, you can see the first few of them They look just like little stars near Jupiter. Here are the first 16: 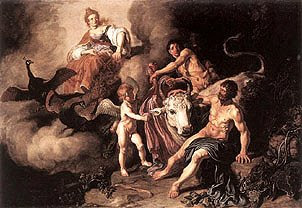 Io - changed by Jupiter into a cow to protect her from Juno's jealous wrath but tormented by Juno anyways since she suspected and sent a gadfly to sting her. She wandered all over the known world to get away from the fly. Eventually Jupiter gave in and released her.

Ganymede – beautiful young boy who was carried to Olympus by Jupiter disguised as an eagle to be the cup bearer to the gods.

Callisto – seduced by Jupiter, who changed her into a bear to protect her from Juno’s jealousy.

Amalthea – a naiad who nursed (it could have been her goat, sources are sketchy) the new-born Jupiter.

Himalia – a nymph who bore three sons of Zeus.

Elara – one of Jupiter’s hotties on the side. She gave birth to the giant Tityus

Pasiphaë – another one of these: Jupiter turns into a bull (although some myths do not have it being Jupiter) she thinks he’s all that and a bag of chips. She gives birth to the Minotaur as a result.

Sinope – Jupiter tried to hold hands with her and she was too clever for him so he granted her perpetual virginity.

Carme – an attendant of Artemis who fell for Jupiter and forsook Artemis’s man hating ways.

Ananke – goddess of fate and necessity and “friend with benefits” of Jupiter.

Thebe – getting tired of Greeks, this is an Egyptian. Io’s granddaughter and another hottie of Jupiter.

Adrastea – she helped to take care of little baby Jupiter.

Metis – a titanide who got pregnant after holding hands with Jupiter only to find out that her child will overthrow Jupiter. Jupiter, taking a lesson from his father, swallows her whole. She dissolves and the baby, Minerva, pops out of his head. Technically not Metis’s child since she no longer existed and thus no longer a threat to Jupiter. Everyone lives happily ever after. Well, not Metis, but…

O.K., that's enough about Jupiter's moons. I'm not going into all of them. Don't worry!
Posted by Mark Alford at 1:05 PM

How many women did this man have? Or god I should say!!! Unbelievable...

I lost count. I read one time that every little city or village had there own special woman that was "blessed" by Zeus, so when communication and roads got better, it seemed like Zeus must have just gone to all the towns instead of having one special mistress.

Are you looking to make money from your websites or blogs by popunder advertisments?
If so, have you ever used ExoClick?