By Jove! Jupiter's Up Next 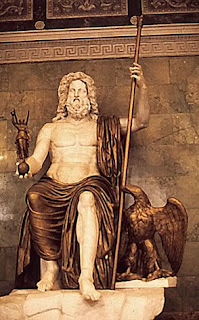 Now that we have passed the asteroid belt and left Ceres and Pallas behind, we move onto the big planets, starting with the biggest planet of all (in our solar system, at least), Jupiter.
We know the Jupiter is the same god as Zeus, but lets look at him just as Jupiter.  What did the Romans think of him?  He was the son of Saturn and Ops (in the Greek Cronus and Rhea) and married his sister, Juno (hey, back then, you didn't have a lot to choose from and Juno did have those ox-like eyes that so turned him on).  He held multiple titles: Tonans (maker of thunder - a title that made the Norse associate him with Thor instead of Odin), Triumphator (sounds like a lame Terminator-type title but instead means (granter of triumph), Fulgar (thrower of lightning), and Invictus (protector - in battle not as much in daily life).
Instead of spending all his time on Mt. Olympus, as Zeus does, Jupiter hung out a lot on Capitoline Hill (reminds me of the old School House Rocks cartoons - "I'm just a bill, on top of Capitol Hill) where his temple was.
Want to know the will of Jupiter?  Watch the birds.  Don't ask me what to look for, I just know that he reveals his will through the flight of birds.  Starting something new?  You better pray for his blessings (along with Janus, the two-faced (no literally, not making fun of him) god of gates and beginnings).  Oh, and wear white.  Jupiter just digs white.  He has white horses, priests wore white for him, white animals were sacrificed to him.
By Jove!  Jove means Jupiter.

You can see Jupiter now at sunset in the southwest (look toward where the sun just set and turn slightly to the left.  If you are in the Northern hemisphere, Jupiter will be chasing Venus (Venus is the brighter of the two).  If you are in the Southern hemisphere (which after installing the ClutrMap at the bottom of the page that some of you are), you can see Jupiter also in the south west, but Venus will not be gracing your sky.  Both are very bright and you can see why it would command the attention of the ancients.  What did the non-Roman ancients think when they saw this brilliant planet in their sky?
Well, in Mesopotamia, they thought of it as Marduk, another chief god.
In Egypt (really ancient Egypt, before Ra and them came into popularity), they saw this planet as Ammon, the ram-headed chief god.
Hindu astrologers referred to it as Brihaspati, who was a religious teacher to the gods.
I found some sources that tried to tie Jupiter, the planet, into Thor, but the Norse were very odd about their star names and I'm not sure that is entirely accurate.
Posted by Mark Alford at 1:12 PM