The Face(s) of War 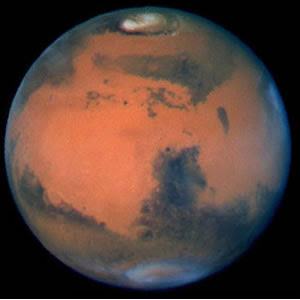 I've actually been slowly working on this post for a week now. I'm determined to get it done today and move on! It's just been one of those weeks.

As we continue our journey through our solar system (having already past Vulcan, Venus, Neith, Lilith, and Apollo asteroids) we finally come to Mars. Mars is known as the red planet and it does not take too much imagination to put red with blood and blood with war and viola! You get the name Mars after, of course, the Roman god of war.

You might be thinking, O.K., we know Mars is red because we have telescopes. Why did they call it that way back when? Well, you can see Mars from your backyard from time to time. It appears as a bright star and has a distinctive red tint to it. In areas that have less light pollution the redness sticks out a bit. We can't see it right now because it is hanging out with Mercury and the sun, but I'll let you know when we can.

In Egypt referred to Mars as Horus the Red (Horus being the slayer of Set - yeah the evil Democrat we talked about earlier). The name Cairo comes from an Arabic word for Mars. In Hindu it is named after Indra, the king of the gods. The Babylonians called it Nergal, after their god of war. Nergal, by the way, is mentioned in the bible in 2 Kings 17:30. Don't confuse him with Nermal, the world's cutest kitten.

Those things are great and all, but what really interests me is not Mars the war god (by the way, I think it is funny that as Mars the Romans have him pretty tough and as Ares the Greeks have him as a wimp). What interests me more is the faces of Mars. 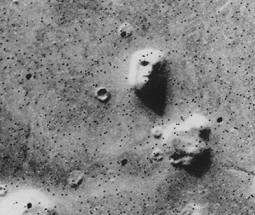 I'm sure you've seen this one. It comes from a 1976 photo taken by Viking Orbiter I. The face you see here is over 2 miles long and looks a lot like some Egyptian pharaoh. Could it be????? Well, unfortunately for all conspirators out there, a picture taken later in 2001 of the same rock showed that it was only shadows. Unless, of course, NASA is hiding something...


That is not the only face to show. I said faces. That is plural meaning more than one. Try this one out: 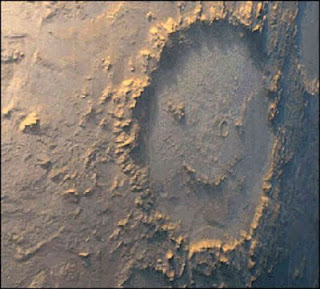 This was actually used in the Watchmen comic book. It exists and is real. Then there is this: 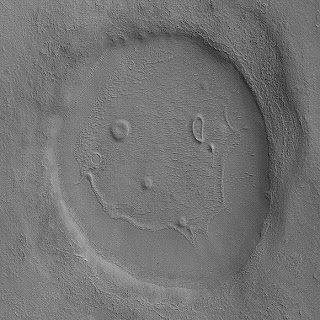 I know, it looks more like something my kids did at the beach, but it is a highly sophisticated space photograph. And last, but not least, here is the proof that NASA lies to us, a picture of Big Foot on Mars! 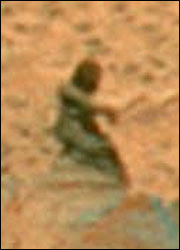 Now, I present to you as I finally end this incredibly long and fairly useless post. We have misnamed Mars. Sure the planet is red. But it is really a nice planet. It is full of happy smiling places. Hmmm. What Roman deity would be better? Some happy guy hanging around Mt. Olympus and all...  Dionysus?  He's already got his own asteroid.
Man.  Did I really write a post with Nermal in it?
Posted by Mark Alford at 6:39 PM

LOL... That was funny ~ I didn't know Mars had all those cutesie faces! :)Curious the Greeks gave Mars a wimpy persona...

Did you know you can create short links with LinkShrink and get cash for every click on your shortened urls.