There's Something About Mercury

O.K., bad pun, but I figured that no one would get my "Crazy About a Mercury" allusion.
The first real planet in our solar system is Mercury.  It has the fastest orbit, which is why it was named after the quick messenger god. Currently we have a space probe up there looking at Mercury.  As you can see
from the picture, there is a large swath of the planet we haven't photographed yet.
But you can see Mercury - right now (well, right now if you happen to be reading this right before sunrise).  If you find yourself up and about around thirty minutes before sunrise, you should look east (where the sun will rise).  All through October Mercury is rising.  By October 20th it will be fairly high in the sky.  You won't be able to miss it, it should be the brightest thing in the east (well, until the sun comes up).
A few facts about Mercury:
O.K., my five year son, Colby, wants to add something:
sfehssxhglrcb
wrecfvghhjiioopplkjhaqszxnm4uytk444ssggsdfgtageyeety
The Mercury of mythology is better known by his Greek name, Hermes.  He is not a major player despite being one of the big 12; however, he is present in a lot of stories.  He is the god of pretty much everything not already gobbled up by the other gods.  One great story that involves him is the story of Hermaphroditos, which was my very first post on this blog. 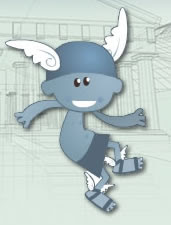 Winged Sandals has a nice little web site where they use an annoying little Hermes to tell you all about Greek mythology.
In other mythology, Mercury was associated with:
Nabu (ancient Babylon) - god of wisdom
Apollo (Greek) - god of archery - while the Greeks saw Hermes for the planet Mercury at night, they thought it was a different planet (or wandering star) when they saw it before sunrise and figured it must be Apollo.
Enki (Sumerians) - a creator god that not only created people, but created "holding hands" as well (I think that probably deserves a planet)
Thoth (Egypt) god of writing
Odin (Norse) god of wisdom, All Father
O.K., next entry we take a break from space and then get back to it!
Posted by Mark Alford at 7:03 PM

Enjoyed the blog -- love the combination of space and mythology. Always wondering how things got their present-day (or is that "present-culture"?) names.

And just so you know you're not alone, as an Alan Jackson fan, I totally got the "Crazy 'bout a Mercury" reference.