We've looked at Oddee before.  This time we are going to check out a post about dogs there.  Two of their dogs in the Eight Weirdest Dog Breeds post were worshiped by ancient cultures. 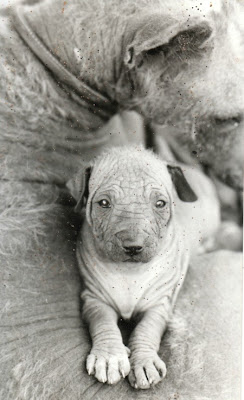 The Xoloitzcuintli (pronounced Sho-lo-eets-quint-lee , although it's sometimes called “Mexican hairless or just shortened to” Xolo”) is a hairless Mexican dog that is so primative that it was actually worshipped by the Aztecs. According to the mythology, the god Xolotl made the dogs from a sliver of the Bone of Life, which was also used to create all of mankind. Xolotl gave the dog to man, asking him to guard it with his life. In exchange, the dog would guide man through the world of death.

Because the breed is not well-known in the US, the Xolo has been mistaken for the mythological Chupacabra in US border states such as Arizona and Texas.
The Xolos are mellow and loyal dogs once they reach adulthood, but up until they become emotionally mature at age two, they are still highly noisy, chewy and high-energy. The breed was not imbred like many other purebred animals, so they are incredibly healthy, but they do require moisturizer, sunscreen and baths to prevent sunburn, acne and blackheads. 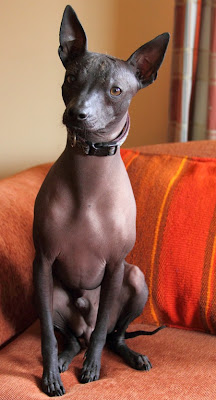 While they may be called orchids, these pups are 100% dog. In many ways, they are like the Xolos, an ancient hairless breed. Like their Northern neighbor breed, these pups were worshiped by another ancient civilization, this time, the Incas, but the breed is actually a lot older than the Incan culture. Pictures of the breed appeared in Peruvian artwork from as far back as 750 A.D.
Peruvian folklore, much of which is based on Incan stories, says that hugging the dogs can help with medicinal problems, particularly stomach problems.

Sadly, the animals were almost ran out of existence after the Spanish conquest of Peru. Small villages in rural areas are all that kept the breed alive and more recently, Peruvian breeders worked to protect the remaining Inca Orchids, ensuring significant bloodline diversity.

These pups make great dogs, but they can be a little headstrong and require proper training from a young age. They also need lotion and lots of baths to prevent sunburn, acne and dry skin, and they do very poorly in warm weather.
Posted by Mark Alford at 6:41 PM

Email ThisBlogThis!Share to TwitterShare to FacebookShare to Pinterest
Labels: Aztec

I have three Peruvian Inca Orchids. They are wonderful dogs. They are affectionate, loyal and goofy. They are very rare in the USA. The breed was recently accepted into the AKC FSS.

Cool. Did you know about their mythological history? Also, has hugging them actually do anything. Chances are slim, but I thought maybe their skin produces oils that might be beneficial. However, it does seem like the owner has to do a lot of work to protect the dog's skin, so I wonder why the Incas would have thought it had healing properties.

Me? I have a mutt. He's the kind that barks a lot and has black fur. No mythological significance. :(