Why, Medusa in spider form, of course.  For the record, I HATE spiders with a passion.  Check this little bugger out: 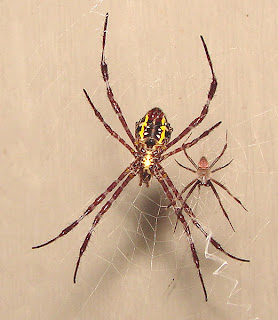 The big one is the female and the little one is the male.  I've actually seen one of these in Hawaii where they are called Garden Spiders.  In Guam, somebody brought in a brown snake of some sort which had no predators.  It practically ate all the birds so now there are pretty much no predators for this spider and they overrun the place.  Scratch Guam off my "To Visit" list.

Now why would this spider make my mythology blog?  Well, in Lost, which I am currently mid way through season 3 (catching up via Netflix), they show this spider in an episode ("Expose").  However, in the show, it is not the harmless little garden spider, it is revealed to be the dreaded Latrodectus Regina, a type of widow spider that is nick named the Medusa Spider.  It appears that one bite from this monster will paralyze you for about 8 hours.  To make matters worse, when we see the spider to begin with, the science middle school teacher, who is one of the island cast aways, is catching one in a jar.  He tells a girl on the island named Nikki about the paralysis poison and that the female (the one he has in the jar) emits pheromones that will attract every male in the area to her.  Pretty nasty stuff. 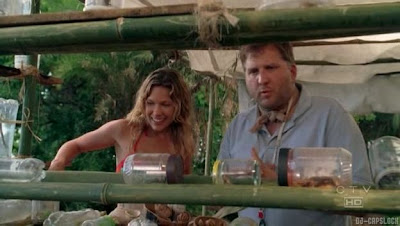 Now, as the episode goes on we find out that Nikki and her boyfriend Paulo (also stuck on the island) are really thieves who killed this older man and took 8 million dollars worth of diamonds.   The diamonds seem to be lost in the plane crash and eventually Nikki gives up the search.  Paulo, however, has found said diamonds and is not telling her because he loves her and is afraid that if she has the diamonds, she might leave him when they get rescued.  Due to his stupidity, she finds out and thinks he was trying to keep them all for himself.  She meets him out in the jungle where she opens the Medusa spider jar that the science teacher had.  Then she throws the spider on him, which bites him and he falls paralyzed.  She then retrieves the diamonds and sets off, but not before those pheromones kick in and she gets bit by a male spider.  In classic Twilight Zone fashion, the other castaways find them, mistake them for dead and do a quick burial.

I love the connection to Medusa here.  However, the Lostpeida website has this to say: "'Medusa' could also reference a creature of Greek mythology."  Come on!  Could be?  Could be?  What's an English teacher to do...
Posted by Mark Alford at 10:48 AM

Email ThisBlogThis!Share to TwitterShare to FacebookShare to Pinterest
Labels: allusions

"Could also"? Doesn't that imply that the spider is primarily named after something else? Weird.