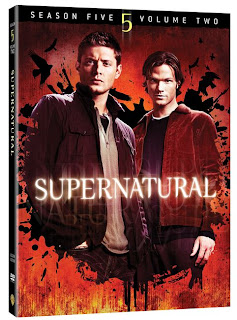 Apparently, Thor is not the only god making an on screen debut.  I ran across this review of Supernatural Season 5 Volume 2.

"Odin, Loki and Baldur are among a group of gods who demon-slaying brothers Sam and Dean Winchester encounter as they race to stop the end of the world.

Loki is another guise of the archangel Gabriel, while Kali, Ganesh, Mercury, Zao Shen and Baron Samedi are also in the mythological group who find themselves up against Lucifer himself as they try to prevent Apocalypse."

All this and a demonic Paris Hilton too.  Now it sounds like my kind of show, but as I am right now trying to get through Lost on Netflicks, I am wary about dragging myself into another convoluted show and with this season DVD being released in volumes, well, I would say that this qualifies as a convoluted program.

Curious, anyone watch this show?  Is it worth putting in the time just to get to see some Norse gods kicking Lucifer's butt?
Posted by Mark Alford at 9:19 PM

Yes! This show is fantastic, you should check it out.

I'll have to see if it is on Netflix instant watch. I'm almost done with Lost anyway.